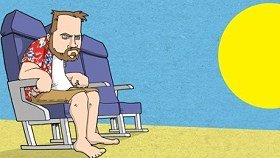 I’m not quite sure what I expected from Cyprus Sunsets, part of Wimbledon’s Illuminate Festival and the latest instalment of Andrew Maddock’s semi-autobiographical Me Plays. This is the first – but hopefully not the last – to be performed by John Seaward, in a one-man show that’s both funny and devastating, telling one man’s deeply personal story but at the same time speaking for us all.

Me is on his way to Cyprus after a bitter break-up. All he wants from his carefully planned trip is to see a perfect Cyprus sunset, and relive one last time a tradition he and his partner used to share. But circumstances – a delayed plane, a sudden storm, the noisy family next door – keep getting in his way, and the days are ticking away…

With a set consisting of just a few chairs in an empty room, director Ryan Bradley’s production relies heavily on two factors to succeed – the writing, and its performer. Fortunately, both are incredible. This is no simple monologue; Andrew Maddock’s perfectly crafted verse paints a series of vivid pictures, recreating not only Me’s holiday surroundings, but also – suddenly, startlingly – his darkest memories, previously hidden away behind a seemingly cheerful demeanour. And so what begins as lighthearted banter, with snide remarks about that family over there with the screaming kids (something with which I’m sure we can all identify), suddenly turns into something very different when the sun goes down. (Here I should pause, by the way, to mention the lighting, which is used to great effect to show the passing of the days.)

John Seaward plays both sides of Me’s character to perfection. He makes us laugh with his scathing depictions of his fellow guests, and distant recollections of holidays with the lads. But when his smiling mask slips, we see the vulnerability beneath, and learn, little by little, the true reason his relationship fell apart, and why he’s here now, in Cyprus. For a one-man show like this, an actor needs to be able to own the room, and Seaward absolutely does; without the distraction of props or backdrops, it becomes difficult to take your eyes off him, even at the moments when it all gets a little too personal to be entirely comfortable.

Knowing that this story is, at least partly, based on fact, makes it all the more powerful. Considering how many times Me says the words ‘Cyprus Sunsets’ during the 40-minute performance, it soon becomes clear that this piece is not really about sunsets at all, but about the importance of looking past first impressions, and the collective responsibility we all have to look out for each other. More than that, though, it’s one man’s honest account of his own experience, beautifully written and performed, and highly recommended.

Illuminate Presents: Cyprus Sunsets
Following on from the Off-West End Award Nominated The Me Plays (Best Male Performance, TBC Award) Press Play Theatre presents a further installment in the trials and tribulations of Me.

Cyprus. What better place to get over a heartbreak? Me just wants to watch one perfect sunset, but like all good package holidays, people just keep getting in the way. Written by Andrew Maddock performed by John Seaward

6th to 9th May 2015
https://www.londontheatre1.com/theatres/time-and-leisure-studio/

Titus Andronicus is not usually a comedy, it is usually a bloody, villainous and vengeful tale, but tonight it is a comedy and a rather amusing one at … END_OF_DOCUMENT_TOKEN_TO_BE_REPLACED

This show is not without clichés - there are three of note in this production. Firstly, the French horn of the show’s title is personified, speaking … END_OF_DOCUMENT_TOKEN_TO_BE_REPLACED

There’s very little in the way of set in this show: aside from chairs, a few crash barriers and at one point, a red carpet, the actors’ movements … END_OF_DOCUMENT_TOKEN_TO_BE_REPLACED

South African born, but raised on the Isle of Man, Pierre Novellie is a true raconteur rather than just another 'stand-up' comedian. He says about his … END_OF_DOCUMENT_TOKEN_TO_BE_REPLACED

This show, Willy Hudson began by saying, is about himself. It is written by himself, is directed by himself and executive produced by himself. Almost … END_OF_DOCUMENT_TOKEN_TO_BE_REPLACED