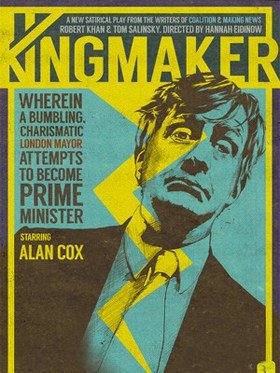 Why would anyone want to be an MP? Yes, the money is good – especially the expenses – the pension is awesome and the subsidised restaurants of Westminster provide a very nice steak for 20p (or so I’ve heard). The reality though is that as an MP, you are constantly being badgered by your constituents who really think you can achieve something for them. Your every move is scrutinised by a hostile press that are happy to stoop to sending undercover reporters to trap you into saying or doing something to make tomorrow’s headlines and at the end of the day you will probably leave office because the electorate turn against your party and not you personally. And yet, there are hundreds of candidates for every seat and for some, being a politician is a career in its own right with an ultimate goal of being the top dog and having the title Prime Minister. But how do they achieve that? Welcome to the world of “Kingmaker” by Robert Khan and Tom Salinsky at the Above the Arts Theatre.

The Conservative government needs a new leader and the country needs a new Prime Minister. For the party and the people, there is only one man to fit the bill, and that is Max Newman (Alan Cox) – a seasoned politician who has been a Mayor of London and has returned to become a member of parliament. Max is everyone’s favourite politician. He is bumbling, a bit vague and prone to making the sort of gaff that shows what a lovely, warm, cuddly human being he is. Forget ‘Teflon Tony’, Max is that politician whose human frailties make him more endearing to the great British public and his path to the top looks so certain that bookies are no longer willing to take a bet on him. Unfortunately, there is someone who may prove a stumbling block on Max’s ambition. Eleanor Hopkirk (Joanna Bending) one of the party’s whips is not happy with the idea of Max being crowned PM and is willing to do anything to stop his ascendancy, in fact she believes she has the ultimate weapon to derail his rollercoaster. Luckily for her, there is another MP that has thrown his hat into the ring. Dan Regan (Laurence Dobiesz) is a young Turk who has risen quickly through the ranks to a junior minister position and although fairly wet behind the ears politically, has decided the time is right for him to bid for the top job. Or has he? As with everything in politics, take nothing at face value. In a Westminster office – empty since the previous incumbent was left in disgrace – Max, Eleanor and Dan meet to discuss the Leadership campaign. Over the course of the next hour, the three of them reveal the truth of the election and truths about themselves and each other, in an explosive meeting that by the end leaves one career in ruins as the triumvirate decide the most important question of the day, who will govern the UK?

Being brought up on ‘Yes Minister’, ‘The New Statesman’ and ‘House of Cards’ I have always believed that politics is the dirty game people say it is and ‘Kingmaker” does nothing to dispel that image. Reading the biographies of writers Robert Khan and Tom Salinsky it seems that there may be a real grain of truth in the play as Robert has worked in Westminster and is also a councillor in Islington so is pretty well versed in the political processes. Director Hannah Eidinow has done a fantastic job bringing the humorous and compelling script to life. The set – a small airless office – works extremely well and gives the actors both the proximity to each other they need for the various confrontations that take place and also space when each of them stops the action and addresses the audience directly.

A BUMBLING, CHARISMATIC LONDON MAYOR ATTEMPTS TO BECOME PRIME MINISTER
Former Mayor of London Max Newman is a seasoned politician, scruffy, energetic, seemingly chaotic immensely charming and very ambitious. As the top job becomes vacant, Max knows his time may well have come. He needs to make his move but he also needs someone to stand against so it doesn’t appear to be a shoo-in. Into the frame comes Dan Regan. Young and impressive, he has risen through the ranks very quickly but, some may say, he is a little naïve? And then there is Eleanor Hopkirk, a seasoned Tory Whip who sees straight into Max’s soul and will do everything to stand in his way. Is Dan a dupe, a decoy or Max Newman’s nemesis, can Eleanor do anything to stop the former Mayor and will Max’s comic and colourful past return to destroy him? Set in a stuffy office in the House of Commons in a time quite close to the present, Kingmaker takes a sly satirical look at the ruthless game of politics and reveals a man behind a myth and a myth behind a man.

The thing about Panto is not to over-think it. It’s about having fun and surrendering to the Christmas spirit. Like Christmas crackers, there is a … END_OF_DOCUMENT_TOKEN_TO_BE_REPLACED

Anyone who's worked in investment banking knows it's largely an intellectually-free zone, polluted with people who calculate each other's value … END_OF_DOCUMENT_TOKEN_TO_BE_REPLACED

By the production’s own admission, the version of events as detailed in Bonny & Read is unlikely to equate to an exactly full and fair account of … END_OF_DOCUMENT_TOKEN_TO_BE_REPLACED

This early Rattigan play has had an interesting life. Set in the Second World War and premiered while that conflict still raged, it has since found … END_OF_DOCUMENT_TOKEN_TO_BE_REPLACED