Heartbeat, which is based on the Constable novels of Nicholas Rhea, was a popular family drama which ran on ITV from April 1992 until September 2010; this stage adaptation has been written by David Lonsdale who played David in the series and who is reprising his role in this play. 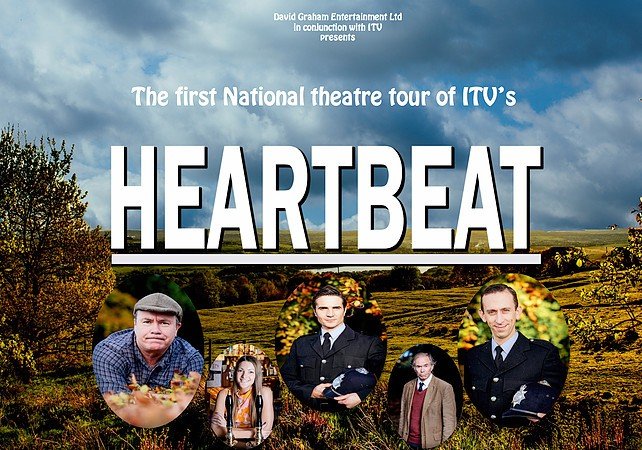 Most of the action takes place in the Aidensfield Arms which is run by Gina Bellamy (Carly Cook). The story itself is a typical Heartbeat episode and tells the story of a stranger (with a secret) who arrives in the village stays at the pub for a couple of nights, together with a lighter part to the story which involves David (David Lonsdale) and, in this instance, PC Geoff Younger (Steven Blakeley – who has also reprised his TV role), before all the loose ends are tied up with a happy ending!

Overall the cast work well together. There are some good scenes involving PC Younger (Steven Blakely) and David (David Lonsdale) and also Gina Bellamy (Carly Cook) and Bernie Scripps (David Horne). For me, personally, the funniest scene was when Alfred the dog (sadly not a real one) made his presence felt.

The set makes full use of the stage turntable and has the bar of the Aidensfield Arms on one side and the rest of the village including a piece of North Yorkshire moorland on the other. There are several rotated scene changes; clever use of a good 1960s sound track, film, picture stills and some clever lighting help to ensure this is not too distracting.

I thought Heartbeat was an entertaining way to spend a couple of hours.

The show is brought to the stage starring the TV cast regulars David Lonsdale who played the loveable David Stockwell and Steven Blakeley who played PC Geoff Younger. They are joined by Hollyoaks star Matt Milburn playing handsome copper PC Joe Malton as well as other favourite characters including Gina Ward and Bernie The production also features a brand-new script and original storyline and offers a great opportunity to take yourselves back to the 60s, with all the great music which was always a feature of the TV series, in a scintillating two-hour live stage show.

Running time: 2 hours (including interval) at the Churchill Theatre until 21st May.
https://churchilltheatre.co.uk/

How can a play be both charming and devastating? Through its tight script, abundant humour and pitch-perfect performances, 4th Country manages to … END_OF_DOCUMENT_TOKEN_TO_BE_REPLACED

Britain, so a London cab driver once told me, is obsessed with the Second World War, as though it happened just recently. Power Luncheon would seem, … END_OF_DOCUMENT_TOKEN_TO_BE_REPLACED

William J Dunleavy, author and star of this monologue play, is a writer and face to watch. He enters the room (as the staging is more geared towards … END_OF_DOCUMENT_TOKEN_TO_BE_REPLACED

Cirque du Soleil’s Luzia is a joyful whirl through a psychedelic Mexico, which reminds us why live theatre is so special. Anyone who goes to … END_OF_DOCUMENT_TOKEN_TO_BE_REPLACED