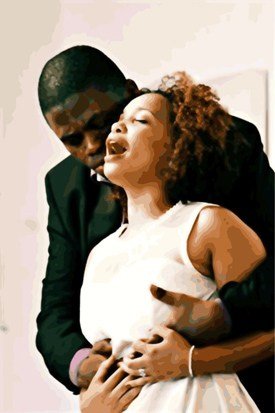 South African Performance company, The Darling Music Experience has made its debut this week at the Tricycle Theatre with their production of Mozart’s Don Giovanni, directed by Raimondo van Staden. Since 2006, the Darling Music Experience has been introducing chamber music through accessible productions to a range of audiences. Their production is like no other as I saw in their steamy and amusing small-scale opera of the lecherous womaniser. It is neatly truncated into less than 90 minutes of worthy musical theatre (which includes an intimate serenade with the Don himself).

This reduced production, from a fully fledged three-hour opera, derives from Dr. Christoph Preiser’s concept, namely ‘alla breve’, which keeps the story brief, but without omitting the important parts of the story. It is split between Mozart’s Italian arias and an English script with just a few fleeting lines in Afrikaans. Yet the big selling point of the production is how relatable it is through its soft mimicry of a TV panelist show, everyday language and contemporary dress.

On the minimalist stage there’s only seven chairs and a bench yet our young and brave cast know how to make the most of the Tricycle’s stage. There are no subtitles for the Italian arias yet for those who are familiar with the opera they won’t be disappointed. Equally, newbies are in for a treat, as Mozart’s music is known for captivating many.

Our maestro and pianist, Dr. Lisa Engelbrecht is in view on stage, dressed for the occasion in a long cocktail dress. Although the opera was originally written for a complete orchestra, she diligently plays and sculpts Mozart’s music on the keys with a surprisingly excellent quality of cast.

Out of a seven-person cast they manage to play eight characters and seamlessly present the dramatic story leaving out the gory first scene: the murder of the Commendatore and rape of Donna Anna. Director, Staden sings lyrically as Leporello. He engages the most with the audience, reminding them of who’s who and adding silly jokes e.g. calling the Commendatore, “VIP to RIP.” He also uses a flip chart for the ‘catalogue aria’, which is a funny tactic, which gets the audience warmed up.

Innocent looking Zerlina, sang by Amanda Meke, is clear and fine voiced yet there’s a cheeky streak within her. As she asks her fiance, Marcello (Martin Mkhize) ‘do you want to beat me?’ she sings ‘Batti, batii’ whilst encouraging him to smack her bottom and Mhkize’s stunned reaction gives the audience something to giggle about. Mhkize has a strong and bold voice with the crafty ability to act as the vengeful Commendatore and jealous lover.

Don Ottavio, the weaker man with a gun, is smoothly sung by tenor, Makudupanyane Senaoana who gains the audience sympathy in ‘dalla sua pace’ and for being bullied by his supposed partner, Donna Anna. Her humorous taunts at Don Octtavio and their silly squabbles add to the comedy. Dressed in a sultry red dress, Maudee Montierre portrays Donna Anna as less concerned daughter and more diva with a voice that will blow audiences away with her high C’s, which reach a stratospheric high. Similarly Goitsemang Lehobye was convincing in her vocal agility as madam Donna Elvira. In a stylist blue dress, she depicted a woman completely torn by her anger for an immoral man and her love for him. Her singing appeared effortless with a light touch of delicacy.

And our temptatious bad boy, Don Giovanni is sung by baritone singer, Johannes Slabbert. Tall, dark and handsome, Slabbert epitomises Don and possess a vocal heft far more mature than a 22-year-old (I can’t believe he is only 22!)  He is also a great stage act. Be careful though as he delivers a fierce serenade song that will beguile you and inevitably seduce you, and seduce me he did when he picked me out from the audience. I blame Mozart!

A philandering, womanising leading man. A string of scorned female lovers. A loose-lipped servant. Murder, revenge and finally retribution. The infamous story of Don Giovanni is re-imagined as you’ve never seen it before.
Adapted to the South Africa of today, this unique production condenses Mozart’s mesmerising tragicomedy and combines it with storytelling in modern English and Afrikaans. With just seven soloists and a piano, this company, who have previously toured rural South Africa, emphasise that experiencing opera is possible anywhere, and accessible to everyone.

The London Philharmonic Orchestra, under its chief conductor Edward Gardner, opened its 2022-23 season at the Royal Festival Hall with a thrilling … END_OF_DOCUMENT_TOKEN_TO_BE_REPLACED

The last in the Sherlock Holmes novel, The Valley of Fear, is adapted in an ambitious production - the general reaction immediately after the show … END_OF_DOCUMENT_TOKEN_TO_BE_REPLACED

The stage location of this urgent and eccentric play from the production company Fuel is nothing if not dramatic. Here we are in the riverfront … END_OF_DOCUMENT_TOKEN_TO_BE_REPLACED

The blurb for Lullaby of Scavengers didn’t really prepare me for the show, sure it mentioned that there may be some explicit content and there was … END_OF_DOCUMENT_TOKEN_TO_BE_REPLACED

There are certain chart music tunes that stick in the mind, such as ‘Bad Romance’ by Lady Gaga or ‘Bohemian Rhapsody’ by Queen. Do they count as … END_OF_DOCUMENT_TOKEN_TO_BE_REPLACED