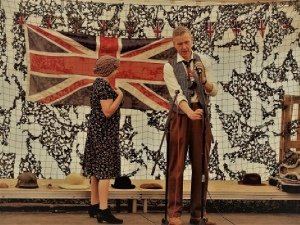 The audience in Paradise Lodge assumes the role of residents in a care facility. Or is it a retirement centre? A nursing home? Sheltered accommodation? A hospice? All of the above? Kylie (Sophie Osborne) is not impressed with the setup: having been promised a ‘UK tour’, she thought this would mean playing to theatre patrons rather than elderly people in care homes like Paradise Lodge. She and Eric (Steve Cooper) are a double act called The Doodlebugs, but Kylie has concerns that what they’re doing on stage may not even matter all that much to people who seem to be either in a comatose state or are otherwise uninterested in this 1940s period musical. (Whisper it, but I think it’s more a play with songs than a musical, even if there is some choreography to accompany one or two of the tunes.)

A very genial atmosphere is created, and although the actual Fringe audience was very attentive, one can imagine, through the ‘interactions’ the actors had with the care home’s residents, the kind of behaviour that might ordinarily get frowned upon one way or another is instead tolerated, expected and possibly even welcomed (if anything as an indication of consciousness). Still, I couldn’t help feeling that literally entering the Land of Nod would, hypothetically, have given the show an air of authenticity.

Alas, there is too much of interest going on to allow for that. There are interspersing scenes in which the lives of dementia sufferers are harrowingly dramatized. It may well be difficult to watch at times, but the sheer reality of it is relatable. I wondered if this production was going to lampoon the conduct of people with dementia, but it would be a particularly harsh interpretation of what transpires to draw that conclusion. This show knows what ‘distasteful’ is, and steers well away from it in its portrayal of both the patients and the frazzled carers who are under pressure to get around to everyone on their lists.

It is commendable that the production takes a holistic approach, even finding time for a subplot involving Kylie wanting to pack it in so soon and not continue the tour: outwardly it’s because of Eric’s artistic decisions, but one suspects she is finding it difficult to cope with seeing quite so many people in need of care and assistance even with everyday tasks. Familiar standards back in the day that feature include ‘Wish Me Luck As You Wave Me Goodbye’ and ‘The White Cliffs of Dover’, and in the spoken word scenes, quite how quickly dementia can progress is surprising and a tad disconcerting. A delightful and poignant production.

A musical comedy set in a care home, Paradise Lodge is based on writer Steve Cooper’s experience of caring for his mother-in-law in her final years as she lived with dementia. One in three people will develop dementia and Paradise Lodge encourages people to think about the person behind the condition.

Eric and Kylie, a dysfunctional ukulele musical duo called The Doodlebugs, embark on their first gig together at the Paradise Lodge Care Home. Told in a series of touching flashbacks and comic songs from the war years, Paradise Lodge transports Vi, Ronnie and the audience back to a time when they had all their lives in front of them – to when they thought they would live forever.

This isn’t the first production to go down the road of referencing a one-star review of their show (from a different publication, I hasten to add). … END_OF_DOCUMENT_TOKEN_TO_BE_REPLACED

Two sisters reunite after the death of their mother, and secrets pour forth. Robert Holman’s new play gently exhibits talented classical acting in a … END_OF_DOCUMENT_TOKEN_TO_BE_REPLACED

Everyone’s vexed in this show, though some have clearer reasons to be than others. Mrs Driscoll (Tameka Mortimer) is struggling with a home life that … END_OF_DOCUMENT_TOKEN_TO_BE_REPLACED

The penultimate production of the 2021 Tête à Tête Opera Festival, based at London’s Cockpit Theatre and showcasing contemporary and avant-garde new … END_OF_DOCUMENT_TOKEN_TO_BE_REPLACED

Relatively Speaking premiered in 1967 and is the sort of show that is, by contemporary standards, very much of its time, and not just because of … END_OF_DOCUMENT_TOKEN_TO_BE_REPLACED