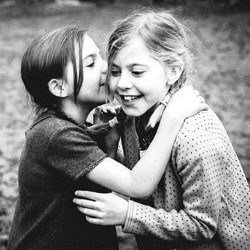 If there’s one thing I’ve learnt in recent months, it’s that when it comes to theatre, bigger isn’t always better. Sometimes, the simplest of shows can be much more powerful and moving than a big-budget West End production. And so it is with Ronnie Dorsey’s A Fine Line, which previewed at London’s New Diorama Theatre on its way to Edinburgh.

A Fine Line is the deceptively simple story of two lifelong friends, Rita and Angie. As Rita reflects on their 60 years of companionship, it becomes clear that their relationship was far deeper and more complex than it might seem on the surface. As we’re taken on an emotional journey covering puberty, sex, marriage, babies, illness and loss, we’re invited to consider the many different kinds of love, and the fine line between confessing our true desires and conforming to what society expects of us.

Rita is played by Judith Paris, who gives an incredibly intimate and moving performance, capturing to perfection the slightly rambling style of an elderly lady looking back with mixed emotions on a lifetime of memories. Rita cuts a lonely figure as she talks fondly to her absent friend – and yet at the same time, her tiny living room often feels full of people; simply by hanging a cardigan on the back of a chair, or a hat on a lampshade, she conjures her companions out of thin air, and although we can’t see them, we can feel their presence.

Ronnie Dorsey’s play, like her previous work, Of Sound Mind, is not always easy to watch. Not only does it deal with some difficult issues; it also feels like the audience is intruding on a very private moment – one of absolute honesty that almost feels like a confession. The play appears to begin midway through a conversation, and it’s addressed almost entirely, not to us, but to Angie. There are times when Rita’s voice drops almost to a whisper, as she gets lost in her memories. But as uncomfortable as it is, the play is also utterly compelling, because this is much more than just an assortment of memories; there’s a story to Rita and Angie’s friendship, and a sense of something special developing, which holds our interest until all becomes clear in the final, powerful moments.

A Fine Line is a story we can all relate to on some level; we’ve all had friends, after all, and experienced the ups and downs that come with them. It’s a story about loss, but more importantly about love, and it’s ultimately uplifting to share – however briefly – in such a special relationship, even if it is only through memories.

Ronnie Dorsey’s A Fine Line which has its world premiere at this year’s Edinburgh Festival Fringe.
This raw, poignant, emotionally honest piece tells the story of two best friends whose love endured the most hostile and tragic set of circumstances, only to flourish late in life.

This never-say-die spirit is embodied vibrantly by playwright Ronnie Dorsey, formerly a make-up artist and costume designer to the stars, who fulfilled her lifelong dream of becoming a professional poet and playwright in her seventies.

A Fine Line at Edinburgh Fringe

It is 2002 – another Royal Jubilee year, and HRH (Mary Roscoe) is due to open a new Science wing in a 'sink' comprehensive where Dr Derek Jones … END_OF_DOCUMENT_TOKEN_TO_BE_REPLACED

Dr Anna LaRosa (Dr Stefania Licari) has a lot to say. Just as well, as she’s the only one on stage in this medical comedy, which largely draws its … END_OF_DOCUMENT_TOKEN_TO_BE_REPLACED

Nikhil Parmar’s one-man show, originally written as a TV pilot, manages to touch on a wide range of themes from Islamophobia to modern fatherhood with … END_OF_DOCUMENT_TOKEN_TO_BE_REPLACED

Handel’s 1738 opera Serse (or Xerxes) is an exploration of power, love and human frailty. King Serse falls in love with the voice of his brother … END_OF_DOCUMENT_TOKEN_TO_BE_REPLACED

Lea Salonga has her fans. She also has some superfans, the ones who yell, “I love you Lea!” at almost every opportunity. If that wasn’t enough, there … END_OF_DOCUMENT_TOKEN_TO_BE_REPLACED