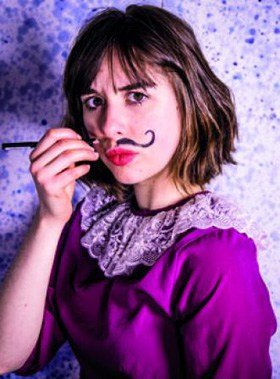 A few months ago, I attended the first ever scratch night at Morley College. Four theatre companies preparing shows for Edinburgh presented the first fifteen minutes of their work, in return for audience feedback. The evening was also a competition, with the winner receiving rehearsal space and the chance to preview their show in its entirety at Morley before heading up to the Fringe.

The judges chose as their winner To She or Not To She, by Joue le Genre. This also happened to be my favourite on scratch night, so I was keen to go back and see how it had developed since then. Originally based on a research project about female actors playing Shakespeare’s male characters, To She or Not To She is a one-woman show, written and performed by Emma Bentley, and discussing her experiences of sexism, in acting and in life in general. It’s a very funny play, but with a serious message at its heart, and it’s clear from her performance that it’s a subject its writer feels strongly about.

To She or Not To She is ‘a feminist Shakespeare show’, which begins with fourteen-year-old Shakespeare addict Emma, who’s desperate to play the part of Hamlet in the school play, but loses out to an inferior actor who just happens to be male. And things don’t get any better as she gets older; a boy Emma likes humiliates her when she tries to make a move, and her male housemate, also an actor, constantly wins more exciting, challenging roles than she does.

Each of these incidents is presented with humour, and the script is littered with in-jokes aimed at both the actors and the women in the audience, but without excluding anyone who doesn’t fall into those categories. At times the show almost feels more like stand-up comedy than a play, and its star clearly enjoys interacting with the audience and bouncing off our reactions. Emma herself is enthusiastic and likeable, so when events do ultimately take a serious turn, we’re ready to sit up and pay attention to her message.

The set and effects are rudimentary at best; jumping into a lake is represented by a squirt in the face from a plastic bottle, and the sound effects often come in at slightly the wrong moment – but these shortcomings are all openly acknowledged and end up only adding to the charm of the show. This is clearly a labour of love, and though it may not be the slickest production I’ve ever seen, its performer’s energy and passion carry it through.

So had the show developed in the direction I expected? Not entirely. While Shakespeare is the springboard, and was the focus of the snippet I saw at scratch night, the rest of To She or Not To She goes on to reveal that sexism is a far more widespread issue, even beyond the acting industry. Emma Bentley’s first one-woman show is a brave endeavour, which draws on her own life and makes a powerful point, but without preaching. The show still feels a little like a work in progress, but will, I’m sure, develop even further during its run in Edinburgh. I’d be interested to see the results.

Winner of Morley College’s CREATE SCRATCH REFINE REPEAT competition, Joue Le Genre, return to the Morley Studio Theatre with their full length preview of their new show ‘To She or Not To She’ before heading up to Edinburgh Fringe Festival 2015.

‘Frailty thy name is woman?! Oh get stuffed Will!’ Armed with her record player, a fake moustache, some rudimentary feminism and a lot of questions, Emma is here to find out exactly why she can’t play Hamlet. Or Macbeth. Or Iago. Or even just a downright Fool. And not just on stage but in real life! Emma Bentley dons the trousers in her debut solo show tackling the trials and tribulations of playing Shakespeare’s men … without a codpiece.

To She or Not to She will be playing at Pleasance Courtyard venue ‘This’, from the 5th-31st August (excluding 17th).

Joue Le Genre
Emma Bentley is a founder and Artistic Director of new theatre company joue le genre, which specially produces new writing dealing with gender and sexuality on stage. The show is co-written and directed Holly Robinson. Both women are interested in using comedy, clown and storytelling to explore and elevate women’s voices.

Everyman is one of the earliest printed plays, originally written in Middle English and first performed around 1510. It is a morality play, popular … END_OF_DOCUMENT_TOKEN_TO_BE_REPLACED

After being closed for over two years due to covid, the Arcola Theatre has re-opened with Barney Norris’s love song to the people who raised him, We … END_OF_DOCUMENT_TOKEN_TO_BE_REPLACED

Now in its 15th year, La Clique have firmly established their place on the world burlesque circuit and this year’s London cast bring their infamous … END_OF_DOCUMENT_TOKEN_TO_BE_REPLACED

Warm, funny and lacerating, Satinder Kaur Chohan’s new play opens with a fly-on-the-wall look at the daily attempts women make to be accepted and … END_OF_DOCUMENT_TOKEN_TO_BE_REPLACED