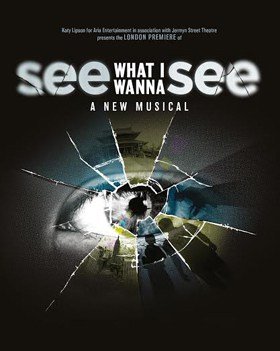 See What I Wanna See, a reprisal of a little known musical by eclectic writer Michael John LaChiusa, is running at the charismatic Jermyn Street Theatre near Picadilly Circus. It’s a suitably arty piece to be performed at this location and is an intriguing watch.

It would be tricky to describe a distinct plot, as three different stories entwine with each other. It would be more accurate to explain the performance as a narrative of a series of dramatic events as seen from different perspectives, questioning the nature of our perception and the character of human response. The stories are based on three Japanese shorts by Ryunosuke Akutagawa which is why one, depicting the tale of a Japanese lady, Kesa, and her lover, frame the other two which are set in New York and which each take up the remainder of the two acts; respectively the killing of a white collar man by a thug deluded by his own ‘infamy’, while the man’s despising wife, looks on, and the practical joke carried out by a deluded priest in Central Park which cons thousands of people into believing that a miracle is going to happen.

Each member of the cast is noteworthy for their talent and versatility; Cassie Compton is a stunning and multifaceted Kesa, wife and actress in turn troubled and swept up in her own beauty; Sarah Ingram is perhaps the actor with the most diversity playing both a medium and an ageing aunt with credibility; Mark Goldthorp and Marc Elliot both take to their various roles with adept professionalism and Jonathan Butterell steals the show in the second act with his incarnation of a desperately lost priest.

It’s easy to see why the show isn’t produced often; it deals with the art of the musical genre rather than the spectacle of it and as such lists no show stopping tunes. That doesn’t negate the quality of the music however, performed live and on stage. It is an unusual directorial choice, as celebrated in the introduction by director Adam Lenson who has turned this show into an entertaining watch. It’s sometimes hard to find the continuity, which can, tenuously, be explained by linking the themes and yet risks losing the interest of the audience at points. The pace is indistinct and tricky to follow. That being said this is a musical which in its very rejection of a generic musical norm finds the liberty to explore the subtleties of character which are sometimes lost in big West End productions.

This is a musical for people that prefer literary drama over West End displays of special effects and belting show tunes, for enthusiasts of Harold Pinter and Tennessee Williams for example, whose exploration of the human condition and relationships work so well in dialogue, this musical works to bring a new dimension to those very same considerations in an intimate setting. It’s a musical unlike anything I’ve ever seen before, and though it may not be everyone’s cup of tea it is certainly worth sampling while it runs.

“I only told you the truth.”
In Feudal Japan, two lovers seek to escape a doomed relationship.
In 1951 New York, a body is discovered but multiple testimonies of how it ended up there stubbornly refuse to align
In 2005 New York, a priest wrestling with his faith orchestrates a hoax that backfires with unexpected results.
See What I Wanna See is a vibrant and provocative new musical that looks at the difference between what we think happened and what actually did. Comprised of three interlocking stories it asks us to question: do we ever see the truth clearly?

It is 2002 – another Royal Jubilee year, and HRH (Mary Roscoe) is due to open a new Science wing in a 'sink' comprehensive where Dr Derek Jones … END_OF_DOCUMENT_TOKEN_TO_BE_REPLACED

Dr Anna LaRosa (Dr Stefania Licari) has a lot to say. Just as well, as she’s the only one on stage in this medical comedy, which largely draws its … END_OF_DOCUMENT_TOKEN_TO_BE_REPLACED

Nikhil Parmar’s one-man show, originally written as a TV pilot, manages to touch on a wide range of themes from Islamophobia to modern fatherhood with … END_OF_DOCUMENT_TOKEN_TO_BE_REPLACED

Handel’s 1738 opera Serse (or Xerxes) is an exploration of power, love and human frailty. King Serse falls in love with the voice of his brother … END_OF_DOCUMENT_TOKEN_TO_BE_REPLACED

Lea Salonga has her fans. She also has some superfans, the ones who yell, “I love you Lea!” at almost every opportunity. If that wasn’t enough, there … END_OF_DOCUMENT_TOKEN_TO_BE_REPLACED