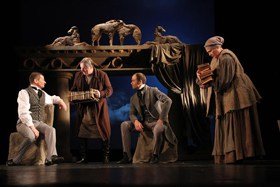 What a joy to see a play that breaks through the neat conventions of English drama and in which comedy and tragedy exist together in the same moment, with actors who can fill the performing space with large, yet detailed performances.

The story is simple: Olga Petrovna comes home to her family estate with her new husband to find Vasilii Kuzovkin, an impoverished ex-landowner, and permanent guest, still in residence, living on family charity. He is undermined, mocked and humiliated by the neighbours and is forced to bear with the mockery patiently. Olga’s husband encourages him to tell the story of his downfall, but his story is interrupted by a drinking bout (a great set piece) that escalates until Kuzovkin is pushed out of control and blurts out a dark family secret that will change everyone’s life forever.

The play is a mixture of humour, bitterness, malice and pathos. Past and present mingle as Olga’s late parents drift in and out of the action. Despite the humour and raucous high spirits of much of it, this is a dark and deeply bitter play, which for all the drunken high spirits, has an undercurrent of heartbreak that doesn’t let up for a minute.

The production couldn’t be simpler: chairs are rearranged to change the scene and a large roman arch indicates doors, which frame the action and the changing moods of weather.

The acting is uniformly wonderful. Victor Aldoshin, as Kuzovkin, moves through the play with a mask of good nature which by the end barely covers his anger and misery. The way he bears the humiliations piled on him was heartbreaking. Anna Artemenko and Oleg Zamyatin, as Olga and her new husband are perfect examples of upper class manner and the rest of the cast are impeccable.

The play runs an hour and a half without an internal, and I was astonished that it seemed to finish so quickly.

National Theatre of Kiev presents: Ward of the Manor
Running Time: 1 hour 55 minutes no interval
Part of the Festival of Ukrainian Culture at the St. James Theatre

A new translation of Ivan Turgenev comedic drama Fortune’s Fool
Performed in memory of Russian theatre director Georgy Tovstonogov, who was a teacher of Mikhail Reznikovich.

Among those there to greet Lady Olga Yeletskaya, is Vasilii Kuzovkin, an old man born to nobility but now penniless. The good-natured Kuzovkin has long served the family and is de facto ward of the estate; he is also the family’s longest running joke.

During a celebration for the newlyweds, dark secrets are revealed and the lives of Lady Olga, Yeletsky, and the devoted Kuzovkin are changed forever. True nobility does not reside in mere titles.
8th to 10th September 2015
https://www.stjamestheatre.co.uk/