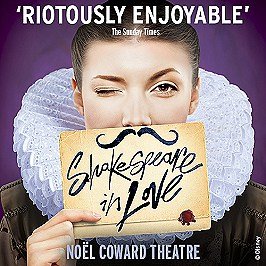 For me, seeing shows multiple times is a waste of time – there are so many plays and musicals in London that you’d struggle to see them all. Lee Hall’s adaptation of Shakespeare in Love however, is a show that joins the few I’ve seen more than once – three times to be exact.

There’s just something about it – the discreet comedy, the minstrels and the period in which it’s set. The Tudors are possibly the most popular Royal Family in terms of interest, with countless books, films and TV shows. Shakespeare himself remains one of the most performed playwrights in the world – no matter how much we complain about him at school, we love him!

Shakespeare in Love takes his life and spins it in a way that lets us get to know the Bard – dashing, imperfect and human. With a wife in Stratford, the young Will Shakespeare (Orlando James) has come to London to seek his fortune, yet he’s lost his gift and no muse can help him. Until that is he meets the love of his life, the beautiful Viola de Lesseps (Eve Ponsonby). With the help of some players, a nurse and of course Spot the dog, Will manages to find his words as he tells the story of these two star crossed lovers.

Ryan Donaldson as Ned Alleyn is perfect – smooth, suave and sexy with just the right amount of arrogance and Paul Brennen as Fennyman is unknowingly hilarious, especially as the apothecary.

The show is still fantastic and the new cast are good, but the sudden increase in comedy does detract from the story itself. Elizabeth I (Suzanne Burden) no longer walks haughtily across the top of the stage instead of bowing, but joins in the jig (all shows must end with a jig). It is funny, but the overall experience is less emphatic and emotional than before.

The background stays largely the same throughout the performance, and appears to resemble the hairstyle of Elle Woods (Courtney Bowman). Regardless, … END_OF_DOCUMENT_TOKEN_TO_BE_REPLACED

Everyman is one of the earliest printed plays, originally written in Middle English and first performed around 1510. It is a morality play, popular … END_OF_DOCUMENT_TOKEN_TO_BE_REPLACED

After being closed for over two years due to covid, the Arcola Theatre has re-opened with Barney Norris’s love song to the people who raised him, We … END_OF_DOCUMENT_TOKEN_TO_BE_REPLACED

Now in its 15th year, La Clique have firmly established their place on the world burlesque circuit and this year’s London cast bring their infamous … END_OF_DOCUMENT_TOKEN_TO_BE_REPLACED