Home » Reviews » Review of Testimony at The Etcetera Theatre 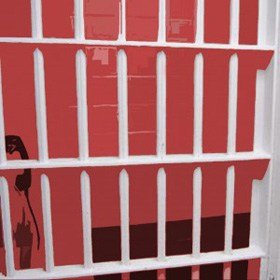 Being arrested and thrown into a cell must be a pretty bad thing, but if that cell is also occupied by one of the ‘great unwashed’ and is supervised by a guard with one screw loose and a penchant for Bruce Springsteen, then welcome to the hell that is Just An Act Theatre’s production of “Testimony”

It is October 1987 and, as the financial world collapses outside, two prisoners are in a cell under a Manhattan courtroom waiting for their time in front of the judge. Punt (George Johnston) is a young vagrant with dirty smelly clothes and a wish to talk. He especially wants to get to know his cellmate – who he always addresses as Sir (Chris Anderson) who couldn’t be more different to punt if he tried. Suited and booted by Amani, ‘Sir’ is obviously a special guest of the court system, with privileges to match his status, for example he has his kept cigarettes and gold lighter. He is impatient and sees the whole arrest process as an inconvenience in his day of making money. Supervising – well reading a magazine – these two prisoners is the Guard (Steve Mace) who seems more worried by his girlfriend’s problems with imaginary polar bears than worrying about the rising tension between his two charges.

Punt seems to genuinely want to get to know ‘Sir’ and is continually speaking to him or even worse singing. For his part, it’s obvious that ‘Sir’ completely despises Punt. ‘Sir’ is a veteran and believes people like Punt should respect what he did for the USA out in ‘Nam. Actually I’m being generous as Sir doesn’t really think of Punt as a person at all, merely a blot on the landscape that should be swept away. As the night progresses, and the Guard goes off for donuts, Punt and Sir continue to rankle each other, name calling, substituting a ‘C’ for a ‘P’ in a first name, comments about mothers, etc. Will the two cellmates get through the night together or will their discussion, with its revelation of past deeds change their dynamic forever?

“Testimony” was a play that ended up being completely different to the show I was expecting to see and is definite proof that you should never rush to judge something – which in some ways is the central theme of the story itself. Writer/Director Loretta Monaco has put together a tense, at times comic, drama of opposites forced to acknowledge and interact with each other in a situation that, to one at least, is completely alien to every concept of life he has. Without telling the audience why the guys are in jail or even the back-story of the guard, Loretta paints a wonderful picture of her characters so that you think you know them as people and you start to relax in their company.

Chris Anderson’s ‘Sir’ is rich, and believes money can get him out of any awkward situation. But, behind this there is a man who has served in ‘Nam and seems to be on the edge of cracking up as his situation doesn’t improve. Steve Mace’s Guard is a bit of an enigma. He does seem to be not the full shilling as my mother used to say and obviously takes some sort of pleasure in watching the friction between the prisoners. However, for pure revelations, George Johnston’s Punt is amazing. Everything about him is wrong. He is a vagrant, an ingrate, a piece of dirt but he is articulate, he is friendly (lovely smile), he seems to take virtually every insult and let it bounce of him, he has a problem with incomplete logic, he even takes care of himself – witness the boxing training – there is obviously some huge back-story there that I would have loved to know. However, he is irritating, and he bounces around a lot – I wasn’t sure if he was on drugs or had ADHD – and unbeknown to the others at the start, Punt has some other deep and highly surprising levels to his personality.

All three actors delivered impeccable representations of their characters and really did justice to the words and direction of the overall play. They were totally believable and the chemistry, particularly between Chris and George, was amazing to observe. ‘Testimony” was mesmerising from the start and kept me completely hooked right through to its highly charged, dramatic and highly surprising ending.

A sinister, existentialist play set in the cells of Manhattan Criminal Court the night of the 1987 Wall Street crash. An impeccably dressed man shares a cell with a vagrant as they wait to see a judge. A nightmarish world of past crimes unfolds as the men realise they are locked in for the night.

If, like me, you’ve lost track of how many cast biographies in theatre programmes you’ve read over the years, an actor thanking their family for their … END_OF_DOCUMENT_TOKEN_TO_BE_REPLACED

Many people can relate to Everything Is Absolutely Fine on at least some level, whether it’s Alice Keedwell (as herself, or at least, a dramatized … END_OF_DOCUMENT_TOKEN_TO_BE_REPLACED

Lockdown: theatres dark; audiences shunned; creativity on hold. And: "No-one’s seen anyone in ages. Not just you.” Enter - or should I say exit … END_OF_DOCUMENT_TOKEN_TO_BE_REPLACED

The comedy value in this episode of The Seth Concert Series was off the scale. Christine Pedi has done several productions of the Forbidden Broadway … END_OF_DOCUMENT_TOKEN_TO_BE_REPLACED

The album for this show, I Could Use A Drink, was released in 2013 but there were nonetheless moments when it felt very much like the show was written … END_OF_DOCUMENT_TOKEN_TO_BE_REPLACED