You are here: Home / Reviews / Review of The Elvis Years at Leicester Square Theatre 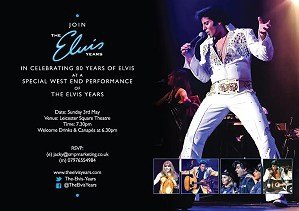 Although he died over 30 years ago, Elvis Presley – the King of Rock and Roll – has remained a major influence on musical styles since he first walked into Sun Records in 1953 and said, ‘I wanna make a record for my mama, kind of a present’. Although I am old enough to have seen some of the television appearances, I was never lucky enough to see the King play live but last night I experienced the next best thing with “The Elvis Years” at the Leicester Square Theatre.

This fabulous tribute show takes the audience on a journey from Elvis’ first recording – the double sided ‘My Happiness’ and ‘That’s When Your Heartaches Begin’, through his appearance at the Grand Ole Opry where he was advised to ‘go back to driving trucks’, his time in the army, the movies, right up to his marvelous comeback performances at Las Vegas. The show is delivered by renowned Elvis performer Mario Kombou who, together with “Jailhouse Rock” Musical Director David Mackay, have taken many of Elvis’ most famous hits and put them together, using archive video to start each sequence, to produce a well constructed, cohesive and highly entertaining show.

That this show was so fantastic is definitely down to Mario’s skill bringing Elvis to the stage. In looks, sound and movement, Mario really is Elvis and at times the sell-out audience seemed to be confused as to who was on stage – including my companion Lynne who not only got a photograph with Mario/Elvis but thanks to her shouting above the other fans, managed to get one of the scarves he gave out. However, Mario didn’t just rely on the music to complete this show, as there were some lively moments where he interacted with the audience, flirting with the women whilst not alienating the men – just like Elvis would have done. But of course, the music was what most people were there for, and it didn’t disappoint in any way. The choice of tracks to pick from is massive and there was a lovely combination used for the performance. Old favourites such as ‘Jailhouse Rock’, ‘In the Ghetto’ and ‘Wooden Heart’, really demonstrated why Elvis was considered a master of so many musical styles, and Mario, along with his band (Simon Parrish, Chloe Buswell, Nick Poyner, Asha Kingsley, Stephen Gray and Matthew Newton) really delivered the goods musically. For the majority of the show, the audience – who were a lot more mixed than I originally thought they would be – were like a tethered cat trying to stay in their seats as they bobbed along with the music but by the end, everyone, including me were up singing and dancing along and having a thoroughly excellent time.

So, ultimately The King may be dead – or possibly riding Shergar on The Moon – but for about three hours last night, thanks to “The Elvis Years”, he was alive and well and bringing joy and happiness to a lucky band of devotees in Leicester Square in truly awesome style.

For one night only, The Elvis Years returned to the West End for a special celebration of 80 years of Elvis Presley. 10 years since the critically acclaimed West End musical Jailhouse Rock closed in the West End, The Elvis Years brings its concert production of the very same musical back to Leicester Square Theatre on 3rd May 2015. As a fitting celebration to mark eight decades of the true ‘King’ of rock and roll, The Elvis Years has extended its tour throughout 2015 of the highly acclaimed West End musical Jailhouse Rock to include 80 unmissable dates across the UK. The show’s West End performance marks the pinnacle of this UK tour.

Mario has been performing as Elvis for over twenty years and also trained as an actor, starring in film, television and theatre productions around the world. Mario starred in the hit London West End musical production of Jailhouse Rock in the role of Elvis Presley’s character Vince Everett which had a successful run at the Piccadilly Theatre.

He has performed live to millions of people on various television and radio shows such as Top Of The Pops and GMTV and was asked to sing the National Anthem at Twickenham Rugby Stadium to an audience of 50,000 people. Mario won the Images of The King competition in 2005 in Memphis, Tennessee and is the only tribute artist in the world to have been officially endorsed by Donna Presley (Elvis’ first cousin). Mario is also endorsed by Elvis Presley Enterprises.