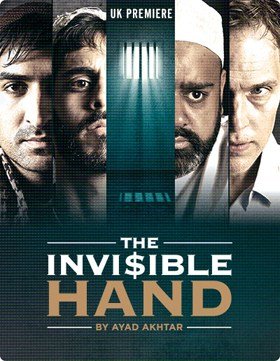 The Invisible Hand is about a lot of things: Western capitalism, money, colonialism, anger, envy and covetousness, idealism, power and corruption, to mention just a few.

The play is set ‘somewhere in Pakistan, in the very near future.’ American banker Nick – compellingly played by Australian actor Daniel Lapaine – has been kidnapped and is being held for ransom in a shabby room by young Bashir (Parth Thakerar) and his mentor Imam Saleem (Tony Jayawardena). Nick’s bank won’t negotiate with people they assume to be terrorists, but Nick has another idea: with his trading skills he will raise the money himself using capital he has stashed away in Grand Cayman. The money, his captors explain, is needed not to line their own pockets but to be used for the good of the community, and especially for the education of the local children.

Forbidden to use a computer himself Nick has to instruct Bashir, and thereby ourselves, on the intricacies of the market. So we learn about ‘puts’, ‘shorts’ and futures and the Bretton Wood System, which effectively means that by guaranteeing gold the US dollar has become the most stable currency in the world. I can’t confess I followed all this but it sounded convincing, and Nick even manages to make a pretty good case for capitalism, if handled right. Wherein lies the problem.

So the plan succeeds, initially, albeit at great sacrifice, but then greed makes things spiral out of control. Nobody is quite who they seem. Bashir, born in Hounslow, has come back to live in Pakistan to compensate for his father, who along with so many others of his generation abandoned his native country to spend his life being spat on in London.

Underneath the anger and aggression there is a decent man trying to put things right. Imam Saleem’s father was killed as a result of his son’s exposure of local corruption, but there’s cruelty behind Saleem’s humanitarianism. Even the apparently friendly Dar (Sid Sagar) has a mean side. Ideas and ideals are batted back and forth as Nick finds himself struggling to defend the country he believes is trying to use its power for the good of the world in general. Bretton Wood was about cooperation, he tells them. ‘Very few wars have been fought between countries that have McDonald’s.’ The ‘Invisible Hand’ of the title is from Adam Smith’s statement that economics work best if everyone is working for their own self-interest. Meanwhile drones hover overhead and from time to time distant explosions can be heard.

The playwright -Pakistani – American Ayad Akhtar – deals with all these issues with a remarkably even hand. His characters play games not just with Nick, and one another, but with the audience’s sympathies. Who was it who said in the best plays everyone is in the right? Whether or not that quite applies here the play as a whole is a pretty effective exposure of the falsity of the ‘invisible hand’. The ending is both horrific, and surprising, yet satisfyingly inevitable.

In between the short and sharp scenes lights are directed straight into the audience’s eyes, serving the dual purpose of exposing us and allowing the actors to rearrange themselves on the set. The performances are pitch-perfect, especially Lapaine and Thakerar.

The direction by the Tricycle’s Artistic Director Indhu Rubasingham is swift and punchy. Thought-provoking, entertaining, intelligent, funny and always absorbing, this is ultimately a riveting play performed pretty well to perfection. Go and see it at the Tricycle before it transfers – as I’m sure it must do – to the West End. Unmissable.

The Invisible Hand by Ayad Akhtar who wrote the Pulitzer Prize winning Disgraced which ran at the Bush Theatre in 2013. The Invisible Hand is at the Tricycle Theatre from Thursday 12th May 2016 to Saturday 2nd July 2016.

American banker Nick Bright knows that his freedom comes at a price. Confined to a cell within the depths of rural Pakistan, every second counts. Who will decide his fate? His captors, or the whims of the market?

If the audience were to be exposed to full versions of the seventy-four songs listed in the programme, it would be a very long show indeed. I suppose … END_OF_DOCUMENT_TOKEN_TO_BE_REPLACED

How can a play be both charming and devastating? Through its tight script, abundant humour and pitch-perfect performances, 4th Country manages to … END_OF_DOCUMENT_TOKEN_TO_BE_REPLACED

Britain, so a London cab driver once told me, is obsessed with the Second World War, as though it happened just recently. Power Luncheon would seem, … END_OF_DOCUMENT_TOKEN_TO_BE_REPLACED