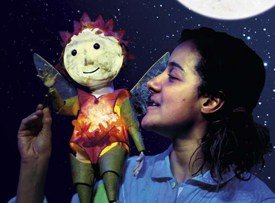 I didn’t realised this before but the Udderbelly isn’t just for big kids, it also caters for the little ones. Although it is clearly decked out as an adult’s playground, you have all the fun of the fair on its doorstep. The Udderbelly also acts as a giant play pen so the little monsters can run amok without too much need for the reins.

For those of you who don’t know, ‘The King Of Tiny Things’ is a children’s book written by award winning author Jeanne Willis. The story unfolds as two sisters camp out in the garden, their night time adventure takes a magical turn when they meet a mystical winged creature. Taking them on a moonlit walk, the sisters meet an array of animated critters teaching them about the diversity on their doorstep. The director fell in love with the book after reading it to her children, realising the story through circus skills, puppetry and song.

The set was unmistakable in its simplicity; a tent, a garden shed, a washing line and a few tree stumps. We’re introduced to the two main characters through song and a bit of physical theatre asking the audience to join in and sing ‘follow me’. Disappearing into the tent for their little slumber party, the night time creepy crawlies appear. The perfect use of shadow puppets mimic the behaviour of the insects, one by one, until an unfamiliar shadow appears.

Possibly the most enchanting of all the characters, the ‘King’ is a little sprite-like puppet with a face that gently glows with a night light quality. Mechanised by hand, there are no hidden wires just big burly adults handling the puppet but this doesn’t get in the way of its majesty. In fact, the puppet certainly captures your attention. The only shame is the fact the soundtrack, giving voice to the puppet, gets a little lost. All the actors are deserving of microphones as the musical backing does little to keep the momentum without their ability to perform loudly.

Details about the show promised juggling slugs, stilt-walking daddy-long-legs and contortionist worms. For a three year old I am sure this proffered a fit of giggles and a squeal of delight at every turn. When it came to the acrobatic bats half way through, I was certainly a game audience member. Some of the costumes and props were quite eye-catching, glowing juggling balls for instance, morphed in to brilliant fire flies. It is quirks like these that bring the show to life.

Overall, if you are a fan of the book, this offers a delightful angle for your young ones to explore. The show is a testament to the power of imagination and how important it is for adults to be as captivated by literature as their children. There were certain stunts that deserved more of an applause than the audience gave but I think the actors were warming to their roles. Turn it up a notch and you’ve got a enchanting show for the whole family to enjoy.

Metta Theatre today announces the forthcoming 10 venue tour for The King of Tiny Things, as part of the company’s 10th anniversary year – Metta10, adapted for the stage by Poppy Burton Morgan from the book by Jeanne Willis and Gwen Millward. Burton Morgan’s production opens at the Udderbelly Festival at Southbank Centre on 13 July, ahead of a tour through until November to Camp Bestival, Dorset; National Play Day Festival, Hull; Salford; Malvern; Stockton-on-Tees; Leeds; Doncaster, and Bristol.

One magical midsummer’s night two sisters huddle together, fearful of what the darkness holds, when a mysterious winged creature appears and leads them on a moonlit adventure. Together they rescue juggling slugs, contortionist worms, and a trio of acrobatic baby bats. But while the girls are busy being brave they overlook their winged friend, the King of Tiny Things, who needs their help most of all. Can they save him in time…
Age guidance: 3 years +
http://www.mettatheatre.co.uk/

The pairing of work by Bob Dylan and Leonard Cohen in a single recital is a logical move. Though the latter died five years ago, his and his old … END_OF_DOCUMENT_TOKEN_TO_BE_REPLACED

If the dialogue wasn’t quite so eclectic and engaging, I might have decided to attempt to have kept a tally of how many times a trestle table is … END_OF_DOCUMENT_TOKEN_TO_BE_REPLACED

Doctor Who: Time Fracture by Immersive Everywhere has plenty to exhilarate both avid and casual Doctor Who fans, delivering on its promise to let … END_OF_DOCUMENT_TOKEN_TO_BE_REPLACED

A brief review of a brief play. It is, as the Prime Minister (Lisa Day) observes, extremely unlikely that her ‘letter of last resort’ would ever … END_OF_DOCUMENT_TOKEN_TO_BE_REPLACED

It’s a production of Hamlet that starts at 7:30pm and manages to come down on the ‘right’ side of 10:30pm - the hardcore fans and followers of … END_OF_DOCUMENT_TOKEN_TO_BE_REPLACED