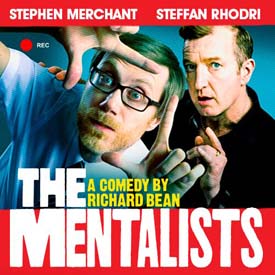 In a small, bland hotel room in London’s Finsbury Park, friends Ted (Stephen Merchant) and Morrie (Steffan Rhodri) have come together to make a movie. Morrie, the videographer, learnt his trade making porn films (whilst also being a randy unisex hairdresser). Ted is a car salesman who believes he has discovered the secret to happiness – his golden chalice, and he wants to tell everyone about it, making his fortune in the process. For only £29.99, punters seeking enlightenment can watch five hours of his ‘teachings’. While the day begins as expected, it increasingly becomes clear that all is not well with Ted.

His credit cards are declined, he leaves enigmatic messages about his location, and suspicions begin to arise about his family and career. Despite allegedly finding the key to Utopia in a forgotten book in his shed, Ted’s own life is crumbling. BAFTA winner Stephen Merchant is convincing as the erratic, nervous and manic Ted, while Steffan Rhodri’s dry humour and comic timing give the show pace. Rhodri plays a very likeable Morrie, an easy going older brother figure to Merchant’s Ted. Indeed in the scene where Ted breaks down and finally admits who he is, the dynamic between the two is very touching.

The Mentalists is an early creation of Richard Bean, former stand up comedian and writer of the worldwide hit, One Man Two Governors. The play is part black comedy, part social commentary, part Faulty Towers-like farce, part journey into the absurd. Suspend logical thought for a couple of hours, wait patiently until the second act to allow all of those references in the first act to make sense, and you’ll like it.

There are perhaps a few too many one-liner cracks in the first act, giving the production an air of awkwardness. But maybe that is intentional, highlighting Ted’s desperation to appear credible and sane. However, the second act is engaging; bizarre, and full of twists, featuring an armed police siege, a fruit bowl, and a short back and sides. Intrigued? Catch it at the Wyndham’s Theatre until the end of September.

Ted (Stephen Merchant) has a master plan to revolutionise the world – and with help from his best friend Morrie (Steffan Rhodri) and his trusty video camera, it may just go global! But Morrie begins to suspect that Ted’s in trouble as unpaid bills and cryptic phone calls start to mount; and as the world closes in on their hotel room in this hilarious and touching comedy, there is only one way out.

It wasn’t that long ago when anyone who gave warnings about Sleeping Beauty would be dismissed as more than a little ridiculous. The concern is that … END_OF_DOCUMENT_TOKEN_TO_BE_REPLACED

Alby hates themself, but can't work out why, and that irks them, even if they don't quite realise it. In this witty, occasionally unsubtle, but … END_OF_DOCUMENT_TOKEN_TO_BE_REPLACED

I have seen some outstanding acting recently at the intimate Finborough Theatre, and this new play is no exception. The highly talented cast quickly … END_OF_DOCUMENT_TOKEN_TO_BE_REPLACED

In the pandemic (remember that?) I worked in adult social care. My role was to help older people in their own homes with daily tasks - I’d cook meals, … END_OF_DOCUMENT_TOKEN_TO_BE_REPLACED