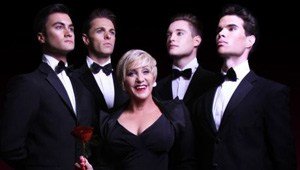 The “Great American Songbook” provides the not-so-raw material for the musical greats of the mid to late 20th Century – from Crosby and Sinatra to Streisand and Bennett. But few of these stars “owned” a song in the way that Judy Garland did. Indeed whilst she was at home with the standards which others sang – “Chicago” or “Stormy Weather” for example – there are “Garland” songs which while others may have attempted them, nobody came close to the emotion and originality of the treatment that Judy Garland gave them. In “The Songbook of Judy Garland” – at Wimbledon this week and later at Brighton, Bromley, Oxford and Woking – it is the Garland originals which stand out. From the opening “Zing Went The Strings of My Heart” to the closing “Somewhere Over The Rainbow” we are subsumed in that magical world.

This is a songfest – with dance and moving pictures. It is about the Art of Judy Garland not the Life. Judy’s daughter Lorna Luft relates a few anecdotes – but unlike the recent “End of the Rainbow” we do not examine any of the harsh realities of what it really meant to be Judy Garland. We accept that a star was born, lived all too briefly, and entertained us like no other. Fred Astaire said “Judy’s the greatest entertainer who ever lived, or probably ever will live.” And it’s in this world of “That’s Entertainment” that this production wisely stays. No segues to psychoanalysis!

Wisely also there are no impersonations and nobody tries to “be” Garland. Except on a couple of occasions the lady herself! There is an extended clip of “Mr Monotony” which was cut from Easter Parade (too sexy!) and which is utterly charming and “Rainbow” at the end is a beautifully clear audio recording by Judy. This is played to a visual backdrop of scenes from her movies which the whole cast watch turning their backs on the audience to do so. 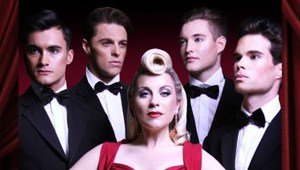 Sentimental? Maybe a bit, but a tear jerker all the same! The songs are shared across soloists Louise Dearman, Rachel Stanley and Georgina Hagen with male support from Ray Quinn and Darren Bennett. They are all excellent but a special mention for Dearman who sings with Lorna Luft the “Get Happy/Happy Days” medley that Garland sang with a very young Barbra Streisand. This is superb and it prompted me to look out the original on YouTube – recommended. Rachel Stanley is the most Garlandesque of the soloists and does a fine “Couple of Swells” with Bennett with the latter in the Astaire part. Hagen sings “The Boy Next Door” beautifully.

Lorna Luft is a trooper and has a powerful and very musical voice. Whilst her elder half-sister Liza Minnelli is the stronger heir to their mother’s tradition arguably Luft has the better voice. (When you see Minnelli on film or TV I defy you not to be entranced by her personality and presence and her acting skills). Judy Garland was such a brilliant actress as well as a unique singer and all-consuming personality she was quite an act for either of her daughters to follow. But in their different ways they have both done her proud.

This is a well-staged production. The music is pre-recorded and not live, other than a piano and a drummer. This worked fine for me as it seemed to for the cast. The male dancers are based on Garland’s “The Boyfriends” and are energetic and wonderfully “camp”. I suspect that this is a nod to Garland’s status as a gay icon – the audience at Wimbledon gave them generous and deserved applause.

It will be interesting to see if this show is a commercial success. It deserves to be but can big theatres attract sufficient audience numbers to balance the books? Garland’s iconic status aside I’m not sure that she has quite the pull among the young that will bring them in. My generation will love it though and it was a treat to be reminded of the powerful genius that was Judy Garland and to remember why we loved her, and miss her.

The Songbook of Judy Garland is brand new stage show celebrating the life and music of Hollywood legend, Judy Garland.

“Keep it shallow, keep it pretty, keep it moving,” declares Justin Vivian Bond, letting the audience determine for themselves what precisely is really … END_OF_DOCUMENT_TOKEN_TO_BE_REPLACED

This play didn’t do that well on Broadway the first time around in 1963, and did worse the second time around, even with a revised script, running in … END_OF_DOCUMENT_TOKEN_TO_BE_REPLACED

One of the very few good things about the COVID pandemic is that the opportunities to live stream theatre performances have increased exponentially, … END_OF_DOCUMENT_TOKEN_TO_BE_REPLACED

Exploring both the Jewish and Christian faiths, Candlesticks in some ways puts forward some good arguments for systems of belief that exist entirely … END_OF_DOCUMENT_TOKEN_TO_BE_REPLACED