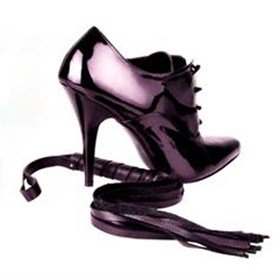 Men playing women, women playing men, with too many heels to count; Custom/Practice’s production of The Taming of the Shrew presents a re-working of Shakespeare’s comedy, meddling with gender to tackle its controversial and much-debated misogyny through exploration of society’s gender constructs.

Baptista Minola needs to find a suitable match for his daughter, Katharina, an intolerable, fierce woman. Many of the men around are willing to assist, with many of them wanting Baptista’s second daughter, Bianca, for themselves. In attempt to marry Bianca – who Baptista wont allow to marry first – her suitors put forward Petruchio to win the heart of Katharina.

Anna Driftmeier had a ball with costume design, with Kazeem Tosin Amore and Tim Bowie (Katharina and Bianca, respectively) squeezed into befitting corsets and heels, with colourful materials dressing the characters throughout. Amore’s ability to slide across the stage in his shoes comically articulated Katharina’s volatile lack of control as he slipped and sped.

Amore delivered Katharina with a moody teenage hump, with a flatness that failed to transpose Katharina’s intolerable zest into its male equivalent. Rather than finding Katharina unbearable, I questioned how much she added to the production at all. However, what did make it interesting was Katharina’s relationship with Petruchio (Martina Laird) and the physical contact between these gender-swapped characters. Laird placing Amore’s hand on her breast from behind, almost with a forced playfulness, not only emphasised the sexual ferociousness of Petruchio but also aroused quite a bit of new thinking regarding the relationship between a character’s “gender” and their body.

Martina Laird portrayed Petruchio with a wacky confidence, which was as much engaging as it was entertaining. Brigid Lohrey and Lorenzo Martelli gave strong supporting performances as Gremio and Grumio, respectively. Lohrey had superb control over her shapes and gesture, with a fascinating ability to mould her face into all sorts of quirky expressions, making her reactions and presence continuously engaging. Martelli had a vibrant energy, which was restrained well enough to keep him from over-doing the fool. Karelian Grace-Paseda (Baptista) graced the stage with a supreme flair and delivered the text with a delicate intelligence.

With an animated sound design and farcical nature to the play’s physicality, the production did have a tendency to slip into pantomime, with potentially too much absurdity to concentrate the focus. However, if nothing else, this wild production of Shakespeare’s text shed a new light on a classic with enough bold performances to make it a fun night out.

An exhilarating retelling of Shakespeares’s dark comedy, where social absurdities are turned on their head, to glorious comic effect.
In this version, the men are to be tamed and the women do the taming…
As part of a month long festival at the Arts investigating evolving relations between minority groups and the theatre – with a focus on gender, race and disability – this unique production sees the main characters switch sex, in a world where the women hold the power and the men are ‘advantageously wed’.
A hilariously disorienting exploration that breathes new life into to this darkest of Shakespearean comedies.