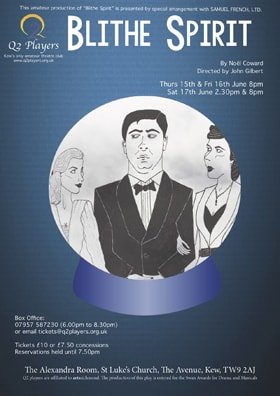 There’s something Shakespearean about the pleas from Q2 Players, both in a director’s note in the programme for this production of Blithe Spirit and in a brief introduction before the show started. This being Blithe Spirit, any “spectral interferences with the smoothness of the show” (they were there, but far too negligible to regurgitate here) could always be put down to paranormal activity. A relatively last minute change of cast member saw Denise Tomlinson take on the role of Madame Arcati, the eccentric medium. Okay, so there was a script in hand, though even this was cleverly disguised as Arcati’s notebook, and it appeared to me the said script was mostly there for safety, fleetingly glanced at rather than being read from.

The set (Junis Olmscheid) is rather impressive, irrespective of whether this being an amateur dramatics production is taken into consideration. Charles Condomine (Hugh Cox) very quietly and carefully leaves as the show ends, fleeing chaos. The guests in Noel Coward’s Hay Fever do something similar at the end of that play, as do the older characters in Private Lives.

But here, the set comes into its own in the final moment, just after Charles has departed, and as convincingly as it did in 2014 at the Gielgud Theatre, on Shaftesbury Avenue. You know the one – famous for putting Angela Lansbury back on a West End stage for the first time in decades. Various objects rattle and the chandelier above the stage shifted about so much I couldn’t help but think of Lloyd Webber’s The Phantom of the Opera.

I do wonder, however, whether the tones of the well-to- do characters could have been a tad more clipped. The Coward wit still comes across, either despite or because of a somewhat subdued delivery of the dialogue by the company as a whole. But not projecting each and every line at full volume works well in this studio space, whilst also giving a genuine living room ambience to a play set – well, in a living room. The humour remains, in places, directly relatable to present-day audiences, decades after its first West End production. “Anything interesting in the Times?” “Don’t be silly, Charles.”

While the comic timing could do with a little more tightening, Elvira (Mia Skytte), beautifully and gloriously hammed up in this production, is palpably having the time of her life, seeing Ruth (Genni Trickett) getting increasingly frazzled. Edith (Cat Lamin), the help, finds herself providing support to her employer Charles in a manner most unexpected. But it’s Tony Cotterill’s Dr Bradman who had me chuckling the most. Over and beyond the cynicism expressed, and then suppressed by Mrs Bradman (Polly Beauwin), the mannerisms were so telling. Talk about a picture painting a thousand words.

Steadily paced, the production doesn’t feel slow, clunky scene changes aside, though that is entirely forgivable, seeing as I have no suggestions as to how the set could be changed around any faster. This is a solid and faithful rendering of what has become a classic play. The cast were clearly enjoying themselves, which rubbed off on the audience’s enjoyment. My own spirit ended up pleasantly upbeat rather than indifferently blithe.

It’s a production of Hamlet that starts at 7:30pm and manages to come down on the ‘right’ side of 10:30pm - the hardcore fans and followers of … END_OF_DOCUMENT_TOKEN_TO_BE_REPLACED

For seasoned theatregoers, this version of The Three Musketeers comes across as one of those shows that takes a similar format to something one has … END_OF_DOCUMENT_TOKEN_TO_BE_REPLACED

Already in a good mood because there is abundant free parking after 1.30pm on a Saturday (and all-day Sundays) near the venue, Little Angel Theatre’s … END_OF_DOCUMENT_TOKEN_TO_BE_REPLACED

There’s an air of familiarity for people who have been in the entertainment industry in this narrative. Global pandemic or not, supply always exceeds … END_OF_DOCUMENT_TOKEN_TO_BE_REPLACED

This was originally meant to be called West End Musical Christmas, and got postponed as the Government had no choice but to impose another lockdown - … END_OF_DOCUMENT_TOKEN_TO_BE_REPLACED