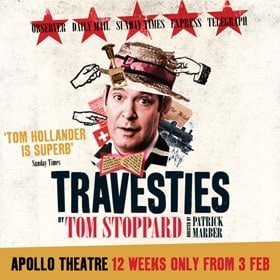 After a successful run last year, Patrick Marber’s revival of Tom Stoppard’s Travesties is back, this time at the Apollo Theatre London. Tom Hollander stars as English diplomat Henry Carr, an elderly man recalling his youth in Zurich during the war. There, he was involved with Dadaist Tristan Tzara (Freddie Fox), writer James Joyce (Peter McDonald), and revolutionary Lenin (Forbes Mason). He recalls how he starred as Algernon in the Importance of Being Earnest during 1917; his memory is immediately questionable, though this charming nobody fancies himself as having been another vital player in Zurich, a hotbed of artistic and revolutionary activity at the time. The references to Wilde’s play imbue another layer of comedy to the whole, as Cecily (Clare Foster) and Gwendolen (Amy Morgen) round out the cast.

My expectations ran high at the prospect of Travesties, and it does not disappoint. Stoppard’s witty and moving play is realised with energy, against Tim Hatley’s layered set design and clever lighting from Neil Austin. The loud ding of a library desk-bell draws us into the past; the mischievous quality this conjures helps direct the erudite script at hand. Hollander is faultless, his openness and charm bringing what could be a barrage of pretentious literary and artistic references into a relatable realm.

Marber’s direction comes through most interestingly in the second half, which features several of the more moving moments of the script; Joyce’s declaration of the artist as a magician is a particular highlight. McDonald delivers a light-touch with Joyce, something that aids in the profundity of his this most excellent speech. Despite what looks like rational debate around art’s value and purpose, these emotional moments remind of the intimate and subjective nature of these questions.

Though Hollander is not to be faulted, I was incredibly impressed by Freddie Fox. His physicality and movement on stage add a dynamism to the production that is otherwise a rather more cerebral experience; he imbues the entire space with Dadaist energy. Tim Wallers is also charming as Carr’s knowing butler, and Forbes Masson is to be commended for making Lenin so thoroughly entertaining and funny, despite being mostly a straightforward walk-on joke.

In all it is patently exuberant; a dash of contemplation mixed with taut action, a healthy dose of self-deprecation and irony, finished with a good pinch of silliness. Travesties is an opportunity to engage with clever concepts, without gauche self-indulgence – it is funny, charming and cuts through the state of the world like a knife, as resonant to the enduring themes of human creativity and emotion as it was in its first performances in 1974.

Tom Stoppard’s dazzling comedy of art, love and revolution features James Joyce, Tristan Tzara and Lenin as remembered – and misremembered – by Henry Carr, a minor British diplomat in Zurich 1917. When Gwendolen and Cecily wander in from The Importance of Being Earnest Henry’s mind wanders too. He knows he was Algernon in a production in Zurich. But who was the other one? The original production of Travesties won the Evening Standard award for Best Comedy and the Tony award for Best Play. This first London revival in over 20 years will be directed by Patrick Marber and will star Tom Hollander.
Cast:
Freddie Fox – (Tristan Tzara)
Tom Hollander – (Henry Carr)
Peter McDonald – (James Joyce)
Clare Foster – (Cecily)
Forbes Masson – (Lenin)
Amy Morgan – (Gwendolen)
Sarah Quist – (Nadya)
Tim Wallers – (Bennett)

If the dialogue wasn’t quite so eclectic and engaging, I might have decided to attempt to have kept a tally of how many times a trestle table is … END_OF_DOCUMENT_TOKEN_TO_BE_REPLACED

Doctor Who: Time Fracture by Immersive Everywhere has plenty to exhilarate both avid and casual Doctor Who fans, delivering on its promise to let … END_OF_DOCUMENT_TOKEN_TO_BE_REPLACED

A brief review of a brief play. It is, as the Prime Minister (Lisa Day) observes, extremely unlikely that her ‘letter of last resort’ would ever … END_OF_DOCUMENT_TOKEN_TO_BE_REPLACED

It’s a production of Hamlet that starts at 7:30pm and manages to come down on the ‘right’ side of 10:30pm - the hardcore fans and followers of … END_OF_DOCUMENT_TOKEN_TO_BE_REPLACED

For seasoned theatregoers, this version of The Three Musketeers comes across as one of those shows that takes a similar format to something one has … END_OF_DOCUMENT_TOKEN_TO_BE_REPLACED