Home » Reviews » Review of We Are The Lions, Mr Manager! at Tara Theatre

Every so often a show makes such an impact on this reviewer that he is forced to remind himself that the task in hand is to review the production just seen, rather than enter into a political discourse about the themes and plot the said show has highlighted. We Are The Lions Mr Manager has nothing to do with a football players’ revolt against incompetent management (that will teach me not to make assumptions about plays based on their titles), but tells the story of the Grunwick industrial dispute of the late 1970s.

Known colloquially as the ‘strikers in saris’, this group of mostly ‘Asian women’ (to quote the production), had a far greater struggle than the Ford sewing machinists in Dagenham in 1968. First of all, the Grunwick strikers had to fight to even get union recognition at the Grunwick Film Processing Laboratories in the first place. I knew nothing about the Grunwick dispute before seeing this show, but I do recall their trading names such as Bonusprint and Doubleprint: my father was a customer of Grunwick, sending them undeveloped camera film and a cheque for payment, then getting back developed photograph prints in the post.

But there was a reason why their mail order prices were considerably cheaper than the high street: at Grunwick, based in Chapter Road, Willesden (the same Chapter Road referenced in the National Theatre play The Curious Incident of the Dog in the Night-Time), the pay was too low and the working day too long. “Overtime is compulsory!” boomed Malcolm Alden (Neil Gore). Jayaben Desai (1933-2010) (Medhavi Patel) understood that point in the employment contract she had signed, but nonetheless objected in the strongest terms with regards to Alden’s terse manner and highly abrasive (mis)management style.

Here on stage, Desai’s sparkling personality made for some highly dramatic theatre, and her choice of words was often vivid. One particularly memorable image was Desai’s likening of any meaningful action on the part of the Trades Union Congress – who were, as far as this production’s narrative is concerned, apathetic at best towards the Grunwick strikers – to honey on one’s elbow. It can be seen, it can be smelt, but it can never be tasted. Well, it can, but not whilst the other arm is holding a placard reading, “THE WORKERS UNITED WILL NEVER BE DEFEATED”. 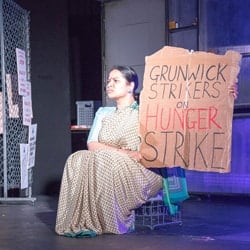 Some good video projections of actual footage of speeches and a large-scale march brought home how real the events being portrayed were. Actor-musicianship was in evidence, through a number of songs performed by Neil Gore, with occasional – and entirely voluntary – audience participation in the form of singing along to a chorus. The many direct addresses to the audience kept us very much engaged in proceedings. From a technical perspective, Neil Gore and Medhavi Patel did remarkably well, handling the light cues and scene changes all by themselves with no stagehands to assist. If there was any doubt that they really were running every aspect of their show, Gore’s parting words at the performance I attended were, “I’ll just get the house lights up.”

The mix of music, songs and spoken word was pleasing to see, hear and experience. Whatever one’s views on industrial relations and trade union membership, this is a truly extraordinary production, telling an important (and still, sadly, relevant) story in such a passionate and compelling manner.

Emotions ran high, for sure, but nothing was melodramatic. The strike may have resulted in defeat for the Grunwick workers, but this production is an absolute winner.

On the 20th August 1976 a group of workers in a film processing factory in Willesden walked out in protest at their unfair working conditions, low pay and the ‘bullying tactics’ used by management.

Led by mostly East African Asian women, the Grunwick strike became one of the longest and most important industrial disputes in British history, and changed the way trade unions thought about race and new immigrant communities coming to Britain in the 1970s.

The women became known as the “strikers in saris” and their fight for fair treatment was supported by thousands of trade unionists and campaigners as more than 20,000 people joined them at the picket lines on one of the mass pickets.

But the story of the Grunwick dispute is not just a story about ground-breaking solidarity. It is also the story of a remarkable woman, Jayaben Desai.

The 4ft 10in mother-of-two defiantly led the first walk-out in protest against the humiliation she and other women employees felt at the Grunwick factory.

As she left, the manager shouted at Jayaben and her colleagues to “stop chattering like monkeys in a zoo”, and Jayaben replied: “What you are running here is not a factory, it is a zoo. But in a zoo there are many types of animals. Some are monkeys who dance on your finger-tips, others are lions who can bite your head off. We are the lions, Mr. Manager!”

Jayaben became the leader of the Grunwick Strike and not only stood up for workers’ rights with selfless dedication, but with her steadfast resolve, she turned the dispute into a national movement for human rights, inspiring future generations and challenging the way people perceived Asian women.

Now, Jayaben’s story is being brought to life for the very first time by Townsend Theatre Productions seeking to relive the strikers’ inspirational fight for freedom, equality and human dignity.

Written by Neil Gore, the play will tell the story of the Grunwick dispute through a mixture of stirring song, poetry, movement and dance, and the play will utilise Townsend Production’s trademark cast of two actors playing multiple roles.

The role of Jayaben Desai will be played by Medhavi Patel, who is a distant relative of the inspirational leader.

There are usually, broadly speaking, two large demographics of patrons at a family show like The Wizard of Oz – children and their responsible … END_OF_DOCUMENT_TOKEN_TO_BE_REPLACED

This production makes excellent use of the available stage space - and, rather like the big musicals at Chichester Festival Theatre, has its cast … END_OF_DOCUMENT_TOKEN_TO_BE_REPLACED

This is an enjoyable and dynamic production of Henry V at the Sam Wanamaker Playhouse. Does it matter that there is innovative action and that it is … END_OF_DOCUMENT_TOKEN_TO_BE_REPLACED

With so many versions of A Christmas Carol doing the rounds (well, it is that time of year), it takes something pretty substantial to stand out from … END_OF_DOCUMENT_TOKEN_TO_BE_REPLACED