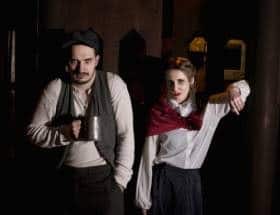 The year is 1888 and the place is East London. As summer comes to an end the area is rocked by the horrific murders of two ‘working’ girls. The murders are bizarre and violent and the locals are running scared. Welcome then to Whitechapel: Suspects, Lunatics and a Leather Apron an immersive trip into this world.

The experience starts before your actual trip back in time. After booking, the audience members receive various emails giving them information about the murders and the experience they will be going through. Interestingly, among the emails is a disclaimer – something I’ve never had to complete for an immersive production before – which needs to be signed before the adventure begins. At the appointed time, you arrive in a nondescript road in London’s East End standing by a blue door and waiting for kick-off. A friendly local confirms your name – and that you have signed the disclaimer – and away you go.

And that’s about as much as I can say really. Like all immersive theatre, Whitechapel: Suspects, Lunatics and a Leather Apron is an experience that is unique to everyone taking part. What I can tell you is that there is a nice attention to historical detail in the overall presentation and during your roughly two hours trip down memory lane, you will meet people genuinely involved in the Ripper case. So, there is Detective Inspector Edmund Reid of ‘H’ Division, initially charged with investigating the crime until Scotland Yard sent in Detective Inspector Frederick Abberline. Then there is George Akin Lusk, Chairman of the Whitechapel Vigilance Committee, which was set up in the wake of the perceived lack of activity of the police. As well as the more famous names, there is John Pizer a local cobbler, unemployed labourer George Hutchinson and even Eliza Waldron, Landlady of the Ten Bells pub. Everyone’s a suspect and everyone has something to hide.

Whitechapel: Suspects, Lunatics and a Leather Apron is a show where you need to be a participant to really get the most from your experience. There is a lot going on and each person will see and hear different things to everyone else. This is one of those shows where you will probably spend hours in the pub discussing the nuances of the case and coming up with your own suspect – remember after 129 years, the Whitechapel Murders are still considered an unsolved case by Scotland Yard. I have to say that over the course of the evening I changed my mind three times as to who the murderer was and, having checked today realised my last suspect couldn’t have done it.

The production standards are pretty high in this show with a nicely created set backed up by atmospheric lighting and sounds – not to mention the old London pea-souper – which added to the overall effect of stepping back in time. This must be a difficult show for the actors, as they are pretty much dealing with a different cast of characters working with them every performance, but I was impressed with the professionalism of each one as they kept the show moving along its course, never breaking character throughout, really living their roles. As a bit of a Jack The Ripper nerd, I would have liked some more historical information – one or two of the characters I had not heard of previously until I looked them up this morning, but that is a minor point really.

Overall, I found Whitechapel: Suspects, Lunatics and a Leather Apron to be a really enjoyable evening. The show is, in part made by its audience and if people come along expecting to have a good old time exploring the seedier side of Victoria’s glorious empire, then they will not be disappointed. There was something going on the whole time and, at times, I wished I had come in a group so we could compare notes and maybe solve the unsolvable crime once and for all.

“On the 29th of September 1888, Scotland Yard received a gruesome letter written in red. “Dear boss,” it began. What followed was a gruesome account of a murderer’s plan. A notorious figure who has never been caught. A figure known only by his signature… “Yours truly, Jack the Ripper.””

This isn’t the first production to go down the road of referencing a one-star review of their show (from a different publication, I hasten to add). … END_OF_DOCUMENT_TOKEN_TO_BE_REPLACED

Two sisters reunite after the death of their mother, and secrets pour forth. Robert Holman’s new play gently exhibits talented classical acting in a … END_OF_DOCUMENT_TOKEN_TO_BE_REPLACED

Everyone’s vexed in this show, though some have clearer reasons to be than others. Mrs Driscoll (Tameka Mortimer) is struggling with a home life that … END_OF_DOCUMENT_TOKEN_TO_BE_REPLACED

The penultimate production of the 2021 Tête à Tête Opera Festival, based at London’s Cockpit Theatre and showcasing contemporary and avant-garde new … END_OF_DOCUMENT_TOKEN_TO_BE_REPLACED

Relatively Speaking premiered in 1967 and is the sort of show that is, by contemporary standards, very much of its time, and not just because of … END_OF_DOCUMENT_TOKEN_TO_BE_REPLACED