Home » Reviews » Cabaret » You Give Me Fever, the Phaedra Cabaret – Review 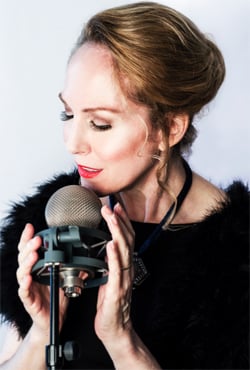 I go to the theatre a lot, too much according to my friends and family, but this is a new experience for me. The back room of the Star Inn is packed and apart from the stage entirely lit by candlelight. Writing notes was not easy!

James Shannon is on stage already playing the guitar when I arrive; the only other cast member, Pippa Winslow, swishes through the room to join him and the show begins. This really is a show unlike others; Pippa and James perform a selection of Jazz standards loosely fitted around the classical story of Phaedra. I am not a great fan of Jazz but these songs are classics and I knew most of them and, in an off-guard moment, was probably caught humming and tapping my foot to Fever, Crazy, Mad about the Boy and others.

Pippa introduces herself as Phaedra (or Fey) and tells her story interspaced with songs and drinks cocktails, which she mixes for herself on stage. The recipes are included in the programme so we can try out the Dirty Greek, Aegean Fizz or Athena at home.

Phaedra is a classical Greek heroine and the stories told may not be familiar to all. The Greek Gods interfere in the life of the mortals, distributing curses and favours that affect their lives. Phaedra is daughter of King Minos of Crete, Theseus the son of King Aegeus of Athens. The Athenians have to send seven maidens and sevens youths every ninth year as a tribute to King Minos. They are sent to the labyrinth, an impossible maze, where they will either starve to death or be devoured by the Minotaur that is imprisoned there. One tribute year, Theseus vows to sail to Crete and kill the Minotaur and, while he is there, Phaedra falls in love with him.

Phaedra and Theseus’ stories of love and tragedy are told in a highly original and entertaining way. The Greek origins of some of our words are explained: for example, a Hypocrite is the Greek word for an actor, as they act in one way but may believe the complete opposite.

I would like to say that this is a great example of a show of this type but I don’t believe there are any other shows like this; entertaining, educational and great, great fun. A truly original production: congratulations to Jack Lynch the writer and all involved.

You Give Me Fever, the Phaedra Cabaret is filled with songs including Mad About the Boy, You’re Getting to be a Habit with Me and Fever which were made famous by legendary jazz divas such as Ella Fitzgerald, Billie Holiday and of course Peggy Lee. With the help of live music, the play creates a sultry tapestry of love’s eternal struggle with passion, addiction, choice and fate.

Phaedra is one of the classic tragic heroines of Greek theatre. But you’ve not heard her story like this before, complete with a twist at the end. It’s a classic tragedy backed up by some classy jazz standards and tasty cocktails.

You Give Me Fever, the Phaedra Cabaret plays at The Back Room of the Star Inn, Quarry Street, Guildford, GU1 3TY from 23 – 27 May at 8pm each evening.