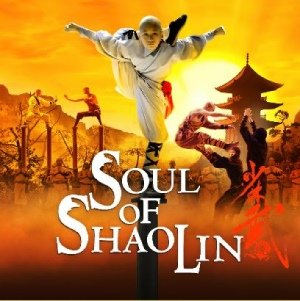 Wembley Troubadour Theatre opened in June 2019. The new spacious venue doesn’t boast any frills but don’t let that put you off visiting. The temporary staged seating is comfortable and nicely spaced out. The acoustics and stage lighting is extremely impressive.

Soul of Shaolin performed to an almost full auditorium in this evening’s show. The nature of the production appeals to an incredibly wide audience from families with small children to those in their twilight years.

The plot follows a very simple linear storyline split into six scenes of roughly the same length. Where a mother leaves her baby boy Hui Guang in what she deems to be a safe place while being chased. Once she thinks it is safe to retrieve him she returns to find he has gone! Meanwhile, the Shaolin monks had rescued him and took him to safety. The rest of the story follows Hui Guang growing up under the careful watch of the monks, while his grieving Mother is searching for him.

The storyline provides the glue that allows this incredible company of martial artists to bring to the stage a wide range of acrobatics and fighting moves. They would be very capable of delivering an impressive performance without a story, but it adds plenty of scope for them to display what they are capable of performing.

The level of concentration and attention to precision is fascinating to watch. As they perform realistic fights, weapon displays with mock swords and during one scene one of them balances on five spikes unaided – you can’t help but wince thinking about the possible pain.

Strobe lighting and the vast array of sound effects are excellently timed throughout the whole performance. Added to which is the scene-changing screen at the back of the stage. This technique is becoming more popular in stage productions and unlike static scenery, it can change smoothly and instantly. In this production, it was used a lot to show the changing seasons as Hui Guang grew into a young man.

It is understandable to see why this group of artists have won awards and appeal to a wide audience. A very dramatic array of martial arts skills are used in the production which are captivating and extremely impressive to watch.

A mother’s love. A son’s struggle.
Playing in London for the first time, Soul of Shaolin is an action-packed theatrical experience featuring over 30 performers in a troupe direct from Shaolin, China. Combining dazzling martial arts expertise with a touching story of loss and redemption, Soul of Shaolin will amaze, excite and inspire the whole family.

Caught up in war and turmoil, Hui Guang is separated from his beloved mother and cast adrift in a frightening world. Upon being rescued, he is taken in by the monks of the legendary Shaolin Monastery and trained in the ancient art of Kung Fu. But when fate intervenes and his mother returns, will Hui Guang be able to triumph over the barriers holding them apart?

Featuring a jaw-dropping mix of martial arts, acrobatics, mime, potent music and vivid theatrical design, the Tony and Drama Desk Award-nominated Soul of Shaolin is the ultimate in spectacle and perfect for all ages.

The descriptions of what happens in this show are so vivid that paradoxically they leave nothing to the imagination – and, at least at the performance … END_OF_DOCUMENT_TOKEN_TO_BE_REPLACED

As theatre productions go this is a memorable, magical experience filled with heart and love and so many tiny thoughtful details, that I’m not sure a … END_OF_DOCUMENT_TOKEN_TO_BE_REPLACED

There are no props at all in Dog, and yet despite a dog, Roy, being very much a key character, the staging and dialogue are more effective than they … END_OF_DOCUMENT_TOKEN_TO_BE_REPLACED

Be astonishing. That’s Derek Jarman’s exhortation to the world at large and - at the end of the show - to this particular audience. And in this … END_OF_DOCUMENT_TOKEN_TO_BE_REPLACED