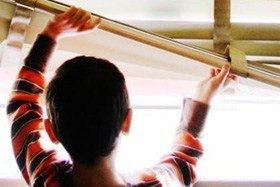 For those of us who’ve never had to go through it, the pain of losing a child is simply unimaginable. Blackshaw Theatre’s new work, Staying Alive, gives us a heartbreaking glimpse into the loneliness and the complex emotions of a grieving mother – and those around her – following the tragic death of her young son in a horrifying accident.

Not exactly light entertainment, then, but there are still moments of gentle humour in this wonderfully human play. Single mother Mary is beautifully played by Rachel Nott; she’s warm, and witty, and so we share her feelings of grief, guilt, and isolation from her oldest friends, who have no idea how to act around her following the tragic loss of her son, Henry.

Emerging talent Kat Roberts wrote Staying Alive with support from bereavement charity SLOW, and explores the different ways people react to grief, both in themselves and others. By considering the horrific events from not only Mary’s perspective but also that of her friends Jack and Jenn, we’re reminded of the power of tragedy to isolate. Each of the characters is wrapped up in their own personal journey, and moving at different speeds, which means they’re incapable of supporting each other when they need it most.

And yet there’s no lack of comfort or hope in the play – it’s just that it comes from unexpected sources, like the simple words of a child, or a few lines of poetry quoted in a particularly touching moment by Nathan, a decorator hired by Mary to repaint Henry’s bedroom.

Michelle Bristow’s set is simple but incredibly effective. In the foreground lies Henry’s empty bed with a teddy bear poignantly placed in the corner, while the trappings of Jack and Jenn’s social climber existence – which everyone is expected to comment on every time they enter the house – are reduced to two-dimensional images outlined in white tape on the back wall. And many of the most powerful scenes actually take place off stage altogether, like Mary’s moving conversation with Henry’s friend Tom, which we hear through the baby monitor, while Jack silently breaks down on stage.

There are a few details left hanging; through a series of flashbacks we get a glimpse of the history between the three friends, which is a tangled web that never gets fully unravelled. And it would have been good to learn more about another friend, Will, played by a charismatic Stephen Ashmore-Blakely, who’s clearly a much more complex character than he likes to admit. It feels we’re just beginning to scratch the surface when he disappears, never to be seen again. In the same way, it feels we never quite get to the bottom of Nathan’s character, and his role in the story ends on a (presumably deliberately) ambiguous note.

But these details aside, Staying Alive is a really powerful exploration of grief – honest and tender, with a couple of particularly intense moments that catch the audience unawares. And it ends on an optimistic note, transforming what could have been quite a dark story into one that educates and inspires.

“There’s nothing worse than old friends…they always think they know exactly who you are.”
Mary had a son, now her son is dead, and that is all. But Jenn is hosting a dinner party, just like before, a chance to catch up. No pressure. Nothing big. Just old friends. It would be great to see you. If you’re free. If you’re ready.
Emerging writer, Kat Roberts, developed the script with support from Blackshaw Theatre company, and bereavement charity, SLOW. Darkly funny, and achingly tender, Staying Alive is about the loss of a child; about how in the wake of any interminable loss, we find ways to connect and survive; an exploration of love, honesty, family and grief.

Handel’s 1738 opera Serse (or Xerxes) is an exploration of power, love and human frailty. King Serse falls in love with the voice of his brother … END_OF_DOCUMENT_TOKEN_TO_BE_REPLACED

Lea Salonga has her fans. She also has some superfans, the ones who yell, “I love you Lea!” at almost every opportunity. If that wasn’t enough, there … END_OF_DOCUMENT_TOKEN_TO_BE_REPLACED

I have no hesitation in saying that the 1952 movie “Singin’ in the Rain” and its 1985 stage version is one of the greatest musicals of all time, … END_OF_DOCUMENT_TOKEN_TO_BE_REPLACED

There are, Maria Caruso was keen to emphasise in a post-show discussion, no wrong answers when it comes to responding to Metamorphosis or even … END_OF_DOCUMENT_TOKEN_TO_BE_REPLACED

Children of the Windrush generation, sisters Dawn and Marcia, grew up in the 1980s. In Roy Williams’ new play Dawn is shown struggling to care for … END_OF_DOCUMENT_TOKEN_TO_BE_REPLACED