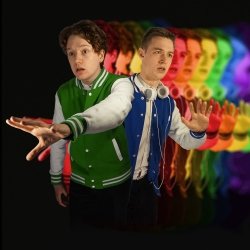 The Soho Rising Season has brought with it a comedy show that received acclaim at The Edinburgh Fringe festival – Tales From The Elsewhere performed by the duo-led company, LoveHard (Jacob Lovick and Tyler Harding) is now doing a victory lap.

Tales From The Elsewhere is a comedy homage to such Americanised sci-fi thrillers as Back To The Future and Stranger Things. In 1984, three high school friends come across a mysterious set of tapes that seem to link up with strange disappearances that have been happening in their town, Hopeville, over the years. The tale is very specifically detailed. So much so that jokes, impressions and multiple characters are quick-paced and can be easily missed if not paying attention. Storyline aside, Harding and Lovick are the selling points to this piece. They are very likeable, funny comedians and you leave impressed by them, rather than the plot of the production.

LoveHard excel in irreverent humour. They balance each other out that it makes a pretty decent comedy pairing – in a combination of ‘geek’ and ‘lad’ culture. The boys can find their audience easily but the challenge is making them come back for more. Past hits such as Murdered by Murder prove that they can.

The highlight of the show is definitely Lovick and Harding’s interactions with each other and the breaking of the fourth wall. They work best when testing and challenging each other – either in a humorous or an amusingly patronising way. However, the niche plot can alienate those unfamiliar with the contents of such film and television references.

Tales From The Elsewhere showcases the performers rather than the show itself. I’d be very interested in seeing what LoveHard produce in the future – as long as the topic is different from this current piece. Those who are a fan of sci-fi parodies can find the duo in Brighton next year, May 2019.

Welcome to Hopeville. Just a sleepy mid-west town of picket fences, backs slapped slightly too hard by farmhands, and where everyone knows everyone’s secrets. Population: rapidly dwindling. When three young whippersnappers stumble across a box of cassette tapes, they are left asking: what is the cause of the disappearances? Why does everyone slap each others’ backs quite so hard? And just what is the Elsewhere?
Two men. 67 characters. This is LoveHard.

This play was first put on at The Mill at Sonning in early 2010 - the world has, of course, changed significantly since then, and the script has been … END_OF_DOCUMENT_TOKEN_TO_BE_REPLACED

It’s easy to see why the Orange Tree has brought this one back for another run, less than a year after its first outing here. This is a bold, … END_OF_DOCUMENT_TOKEN_TO_BE_REPLACED

I always loved Choose Your Own Adventure books. Definitely not the Steve Jackson ones where you had to roll dice (who did that?) to find out whether … END_OF_DOCUMENT_TOKEN_TO_BE_REPLACED

Well, there’s a bit about Pablo Picasso’s (1881-1973) paintings in this show that bears his name. But it’s mostly about his approach towards women. … END_OF_DOCUMENT_TOKEN_TO_BE_REPLACED