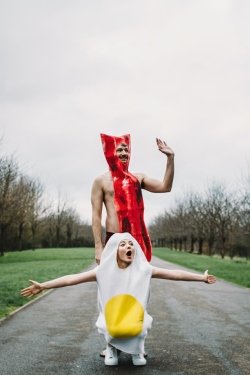 Sketch comedy hits The Soho Rising Season in the form of dynamic duo Anna Piper and Max Levine – together known as Hot Mess. After originally meeting each other as members of The Soho Young Theatre Company two years ago and performing their show at this year’s Edinburgh Fringe Festival, Piper and Levine are back in Soho doing what they do best.

Sketch comedy is a tricky endeavour – very rarely do you find a show that’s all ‘hits’ and no ‘misses’. Piper and Levine have collected their funniest sketches over the past 12 months (and filmed their creative meetings looking for material) and even though there are a handful of lacklustre sketches, the pair are so likeable you forget most bumps in the road.

Hot Mess are a ridiculously funny team and combine well-thought sketches with video interludes and speed rounds of quick-fire scenes to keep their audience engaged. As well as working well together, Piper and Levine are best friends. And you can tell. They bounce off each other so frequently and naturally, its fun for the audience to see their friendship. However, sometimes this can hinder some sketches. Topics range from interviews, aliens, politics, interviews and odd historical lessons. The latter is inspired by Piper’s experience with touring interactive history lessons around schools.

Both Piper and Levine bring something different and individual to the show – Levine can play the most controlled and coy one at times in comparison to Piper’s more unhinged characters, but they swap enough to make sure all sketches bring something a little different.

The show needs more polishing in its structure but the night was heavily enjoyable. Keep an eye out for Hot mess in the near future – I’m sure this is just the beginning!

Following a four star Edinburgh Festival run and gigs in The London Eye for Time Out, Sketch Off Finalists Hot Mess bring their debut hour to the Soho Theatre. Anna and Max are best friends and spend a lot of time together…some would say too much. To add intensity to an already zealous friendship they decided to make sure they didn’t miss any good sketch ideas by filming themselves for a year. “Hot Mess pumped up the pace with fast sketches…the two actors supporting and flowing with each other beautifully.” Chortle 2018 “The shrieks of laughter and delight were quite unlike anything we’ve ever heard” Brainchild Festival.

This play was first put on at The Mill at Sonning in early 2010 - the world has, of course, changed significantly since then, and the script has been … END_OF_DOCUMENT_TOKEN_TO_BE_REPLACED

It’s easy to see why the Orange Tree has brought this one back for another run, less than a year after its first outing here. This is a bold, … END_OF_DOCUMENT_TOKEN_TO_BE_REPLACED

I always loved Choose Your Own Adventure books. Definitely not the Steve Jackson ones where you had to roll dice (who did that?) to find out whether … END_OF_DOCUMENT_TOKEN_TO_BE_REPLACED

Well, there’s a bit about Pablo Picasso’s (1881-1973) paintings in this show that bears his name. But it’s mostly about his approach towards women. … END_OF_DOCUMENT_TOKEN_TO_BE_REPLACED