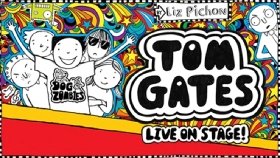 Tom’s doing everything possible to stay out of trouble but somehow he’s got THREE sad faces on the school achievement chart! And getting another sad face means Mr Fullerman won’t let him go on the SCHOOL TRIP! Moany Marcus Meldrew is making things worse and now Tom’s annoyed his grumpy sister Delia. EVEN Amy Porter (who’s smart) won’t talk to him! Can his best friend Derek help? Will Rooster the dog stop eating his homework? Will his grandparents the Fossils ever make something he can actually EAT?

With 15 books in the Tom Gates series so far, Liz Pichon is a multiple number one bestselling children’s author and illustrator. Over 5 million copies of Tom Gates books have sold in the UK and abroad and the series has been translated into 43 languages. Liz has won over 20 awards including the Roald Dahl Funny Prize, Waterstones Children’s Book Prize for ‘Best Fiction for 5 to 12-year-olds’, multiple Specsaver Bestseller Awards and a Blue Peter Book Award – and badge! In 2017, Liz was the World Book Day illustrator and the Tom Gates series has been optioned for television.

Daniel Harkin plays Mr Fullerman/Dad. His theatre credits include Guess How Much I Love You (UK tour), Comet (Pleasance Theatre), and Jane Eyre and The Wind in the Willows (UK and Ireland tour).

Q: What attracted you most to be a part of Liz Pichon’s Tom Gates?
Alice: I’m a big fan of cartoons and I love Liz’s gorgeously illustrated books so was very excited at the prospect of bringing them to life!

Q: You play the part of mum, can you tell us about your character?
Alice: Tom’s Mum is your typical lovely Mum!! (Of course, I’d say that, I’m playing her!!). She obviously has the daily hassles of getting her children to school and getting them to do their homework but at heart, she loves her kids!! She’s a massive fan of vintage clothing but not so much of cars with hotdogs on the roof.

Q: This is a touring production – What do you enjoy most about touring?
Alice: The best thing about touring is seeing our fabulous country!! And the shoe shops they have to offer. You also get to see loads of our theatres and meet the people that work in them proving that our industry is still as strong as ever.

Q: Why should everyone get along to see this production?
Alice: This is an exciting realisation of a really popular book with music, animation and lots of fun!

Neal Foster is Actor/Manager of Birmingham Stage Company which since its foundation in 1992 has staged over eighty productions. The company has become one of the world’s leading producers of theatre for children and their families, including Horrible Histories Live on Stage for thirteen years in the UK, Dubai, Qatar, Bahrain, Hong Kong, Singapore, New Zealand and Australia. Foster has written and directed all of the most recent Horrible Histories shows including Barmy Britain – Parts One, Two, Three & Four (Garrick Theatre, Apollo Theatre and Sydney Opera House); Groovy Greeks and Incredible Invaders for a national tour and Wicked Warwick at Warwick Castle. His first fictional adaptation was David Walliams’ Gangsta Granny, which transferred to the Garrick Theatre and then the Harold Pinter Theatre and was nominated for a Best Entertainment and Family Olivier Award. His adaptation of David Walliams’ Awful Auntie is completing its 18-month national tour and his next David Walliams’ show will be Billionaire Boy in autumn 2019.

'Look anyone will tell you, I’m a pretty straight sort of guy.' Tony Blair A reckless reappraisal of the life of former Ugly Rumours front man and … END_OF_DOCUMENT_TOKEN_TO_BE_REPLACED

Michael Harrison and the Really Useful Group are thrilled to announce that The Wizard of Oz, the musical based on the iconic story by L. Frank Baum, … END_OF_DOCUMENT_TOKEN_TO_BE_REPLACED

Following major demand for tickets, the Queen of comedy Dawn French has announced a host of new UK tour dates for her critically acclaimed live … END_OF_DOCUMENT_TOKEN_TO_BE_REPLACED