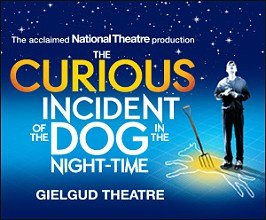 Now well into its highly successful run at the Gielgud Theatre, The Curious Incident of the Dog in the Night-Time remains beautifully delivered, worthy of all its accolades. Adapted by Simon Stephens from the bestselling novel by Mark Haddon, we enter the world of a 15-year-old boy named Christopher Boone (Sion Daniel Young) who has Asperger’s Syndrome, following his investigation into the mysterious killing of a neighbourhood dog. Originally written from Christopher’s perspective, Marianne Elliott’s expertly directed play does an excellent job at translating this intimacy, while adding a new dimension to the story – an insight into the bigger picture, the experiences of those living closest to Christopher.

Set against an incredible mathematical framework of squares and lights, Christopher’s calculated dissection of the world around him is realised in physical form. The set is divided down into precision parts, moving and shifting to accommodate the story within the grid-like worldview of Christopher’s mind.

The mechanics flex and shift to suit these complex, emotional characters. The creative team (including designer Bunny Christie and lighting by Paule Constable) are to be commended on their work to bring together the kind of lighting and staging which so effectively translates the nuances of the novel without overcomplicating the experience. Much is also made of mime and physical comedy, adding buoyancy to otherwise dark and difficult subjects.

Sion Daniel Young is a revelation in this role, and cannot be oversold. His presence on stage is a delight as he manages to imbue Christopher with flawless, elastic physicality, throwing himself about in sync with the ensemble, and yet conveying also the character’s intense distaste and distrust of other human beings (and any physical contact with them). Young’s performance is subtle, complex, and without stereotype – Christopher’s problems are neither overwrought nor oversimplified, giving him the balance and dignity which inspires respect for his unique worldview. He is supported by universally solid performances, the relationship between Christopher and his father Ed (played by Mark Rawlings on the night of my visit) made particularly profound by a restrained yet honest performance from Rawlings.

Questions around whether this story is truly representative of those with AS become secondary to the feeling that this is Christopher’s story – an individual story. This highlights a problem with addressing disability in storytelling – that tendency to assume all those branded with a particular syndrome are the same.

This is Christopher’s tale, his quirks and peculiarities particular to him, and it is also an important societal story, something the play is able to achieve beyond the scope of the novel, as the worldview expands to deliver us a look into the lives of those who live with, support, and teach Christopher.

It is not a short play, but this is a night out that you and the family will never forget. Expect to find yourself both laughing and crying in this witty, poignant story, expertly designed and delivered to create an unforgettable theatre experience.

Christopher, fifteen years old, stands beside Mrs Shears’ dead dog. It has been speared with a garden fork, it is seven minutes after midnight and Christopher is under suspicion. He records each fact in the book he is writing in an attempt to solve the mystery of who murdered Wellington.

Christopher has an extraordinary brain. He is exceptional at maths but ill-equipped to interpret everyday life. He has never ventured alone beyond the end of his road, detests being touched and distrusts strangers. But now his detective work, forbidden by his father, takes him on a frightening journey that turns his whole world upside down.

How can a play be both charming and devastating? Through its tight script, abundant humour and pitch-perfect performances, 4th Country manages to … END_OF_DOCUMENT_TOKEN_TO_BE_REPLACED

Britain, so a London cab driver once told me, is obsessed with the Second World War, as though it happened just recently. Power Luncheon would seem, … END_OF_DOCUMENT_TOKEN_TO_BE_REPLACED

William J Dunleavy, author and star of this monologue play, is a writer and face to watch. He enters the room (as the staging is more geared towards … END_OF_DOCUMENT_TOKEN_TO_BE_REPLACED

Cirque du Soleil’s Luzia is a joyful whirl through a psychedelic Mexico, which reminds us why live theatre is so special. Anyone who goes to … END_OF_DOCUMENT_TOKEN_TO_BE_REPLACED