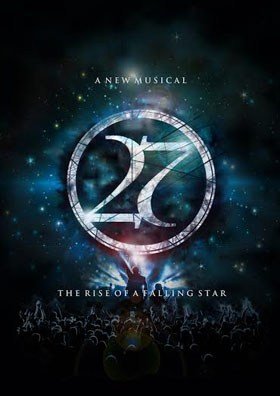 “27” is a modern fable of our time, a dark interpretation of one of humanity’s oldest stories, written and co-directed by Sam Cassidy.

“27” will run from Thursday 8 September to Saturday October 22 in a 6-week season at London’s 170-seat Cockpit Theatre in Marylebone.

Hendrix, Joplin, Cobain, Morrison and Winehouse: all music legends whose lives were tragically cut short at 27.

“27”, featuring 13 musical numbers and a cast of 15, is a shattering exploration of the fragility of life and the unwitting connections that bind us together. This rock musical with original lyrics and score serves up songs to die for and killer guitar riffs and will take you somewhere you probably didn’t think existed anymore.

Orpheus is a would-be rock star turned icon whose experiences of fame and notoriety lead him on a journey of unstoppable self-destruction.
Another name for the list. At the tender age of 27. Another star, extinguished…

Arlene Phillips said “I love working on projects that shout out ‘we are different’. Working on the fringe of the arts which I have been doing more of in these last couple of years I find really exciting. ‘27’ has a powerful and emotional message that evokes so many memories of not just Amy Winehouse but so many others who began with a prodigious talent that eventually destroys them. It is a musical that could connect to so many people of different ages. The musical appeals to me because it was written by a young writer, Sam Cassidy, who has the power in his music to take the audience from one moment of joy to instant tears of sorrow. Casting this show won’t be easy because we need true actors who are able to get into the depth of the roles, and like Andrew Lloyd Webber, Sam writes music that is only possible for a few to sing, and of course, I want them to dance!”

Casting to be announced.

“27” is produced by Adam Pritchard, Sam Cassidy and Nick Eve on behalf of 27 Musical London Limited.

Arlene Phillips (co-director) is a showbiz legend honoured as a CBE for her services to dance; she has worked with stars from film and TV, to theatre and arenas, as well as becoming one of Britain’s favourite television judges. Her credits as director: Saturday Night Fever, international productions of Starlight Express, US Tours of Joseph and Jesus Christ Superstar, Lord of the Dance, The Songbook of Judy Garland, Brazouka, Strictly Come Dancing Live Tour, The Music of Andrew Lloyd Webber and the Manchester XVII Commonwealth Games. As choreographer: Jackie The Musical, Starlight Express, Wizard of Oz, Flashdance, The Sound of Music, Grease, We Will Rock You, Saturday Night Fever, Joseph, Jesus Christ Superstar, EFX at the MGM Grand, Las Vegas.

As an actor, Sam Cassidy (writer and co-director) appeared in musicals including Joseph and his Amazing Technicolor Dreamcoat and The Rocky Horror Show. He is currently starring as Prince Theo alongside Billy Zane in the major new ABC TV series, Guilt. Although “27” is Sam’s first musical as a writer, he has been writing music and assisting his mother Chrissy Wickham, now a choreographer, but an original member of Hot Gossip and the original Ashley in the musical Starlight Express, on various projects since he was 16. While attending Mountview
Academy’s Musical Theatre course, he was also writing music as a singer songwriter managed by 141 Management.

Following its multiple West End runs, and continuing success at its home – The Other Palace, Heathers the Musical will embark on its highly … END_OF_DOCUMENT_TOKEN_TO_BE_REPLACED

After creating the “absorbing and provocative” Version 2.0 and the “eminently lovable” Letters, Kashyap Raja returns to London with his new play Earth … END_OF_DOCUMENT_TOKEN_TO_BE_REPLACED