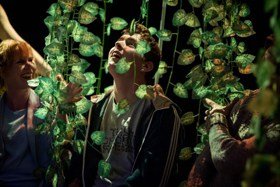 I must confess, I didn’t knew what to expect. Frozen Light is a company that devises theatre for children, teenagers and adults with PMLD, which stands for Profound and Multiple Learning Disabilities.

There were four children with their carers when I went to see The Forest at Stratford Circus Arts Centre. When the door opened, we were all welcomed in by a lovely, bubbly lady with an affectious laugh. She warmly guided us in one by one. The seats were covered with a brown blanket and some had cushions on them that resembled a trunk of a tree.

The set was filled with bits of tree trunks and stuck in them were these wonderfully created trees – made up by a stick and a metal ring where leaves were hanging from – the first proof of this theatre’s playful geniality.

On two of the trunks in the centre of the stage are two people. A girl called Thea who is sitting on one of them and is holding a book, and Robin who is standing on the other. Somewhere hidden between the beauty and later revealed, stands a piano. Once all seated the lovely, bubbly lady with a smile that would brighten up not only your day, but also your entire life reveals herself as the caretaker of the forest. Robin is a street artist, a human statue, who also entertains the people of the city with his guitar playing. Thea writes poems and thoughts in her book. No one really enters the forest and both Thea and Robin seem disappointed, sad and lonely. No one is very much interested in Robin’s art and nobody reads any of Thea’s words, so she rips pages out of the book. That’s when the caretaker and narrator of this wonderful story decides to both help Thea and Robin find happiness…

As an audience they turn you into which I felt were like animals of the forest, especially on the performance that I saw, where one of the children got up when the extremely talented Robin started to play the guitar. She jumped up and as any child dreams of, stepped into the story and she was part of it for the rest of the performance. We all were.

Personally, I, not once thought that they were breaking the fourth wall. I felt very much part of the experience. For just over an hour I had escaped reality, life. If there is anything you might think of, the actors and the story covered it. Sound, music, touch, smell, dance, laughter, taste, feel… I could go on but it is something you need to experience for yourself. And if you think I was being treated differently than the children then you couldn’t be more wrong. And for a long, long time, I wasn’t even being afraid to make a mistake or anything. The magic that occurred during this performance is just unique. It was the twilight zone if Disney would have invented the twilight zone. The music and songs were so beautiful, so touching, so soothing. The objects used to create the surroundings, smell and taste of the forest were so clever. If I have any comment to make is that the actors were too humble in taking their bows. But then the most beautiful thing about this company is that it isn’t about the actors. It’s about the children, teenagers and adults with PMLD. I can’t describe the joy I felt of all these children, their caretakers, the actors and myself. This production deserves awards and definitely needs to be experienced.

THE FOREST
FROZEN LIGHT IN ASSOCIATION WITH THE NEW WOLSEY THEATRE, IPSWICH
Trapped in lives filled with daydreams, Thea and Robin both crave an escape from their everyday routines. One day, they are drawn into the dark and mysterious forest and find themselves on an unexpected journey of self-discovery, filled with surprising encounters and experiences that change their lives forever.

An intriguing multi-sensory tale that immerses audiences in a world full of new sights, sounds, smells and sensations; The Forest is the unmissable new production from Frozen Light created specifically for teenagers and adults with Profound and Multiple Learning Disabilities (PMLD) to enjoy with their friends and family.

Frozen Light are theatre makers that devise work specifically for audiences with profound and multiple learning disabilities (PMLD). TheForest has been created especially for teens and adults with PMLD. The Forest is a multi-sensory adventure that immerses audiences in a world full of new sights, sounds and sensations; our protagonists, Thea and Robin, crave escape from their everyday routines and find it on an unexpected journey full of surprising encounters.

It wasn’t that long ago when anyone who gave warnings about Sleeping Beauty would be dismissed as more than a little ridiculous. The concern is that … END_OF_DOCUMENT_TOKEN_TO_BE_REPLACED

Alby hates themself, but can't work out why, and that irks them, even if they don't quite realise it. In this witty, occasionally unsubtle, but … END_OF_DOCUMENT_TOKEN_TO_BE_REPLACED

I have seen some outstanding acting recently at the intimate Finborough Theatre, and this new play is no exception. The highly talented cast quickly … END_OF_DOCUMENT_TOKEN_TO_BE_REPLACED

In the pandemic (remember that?) I worked in adult social care. My role was to help older people in their own homes with daily tasks - I’d cook meals, … END_OF_DOCUMENT_TOKEN_TO_BE_REPLACED