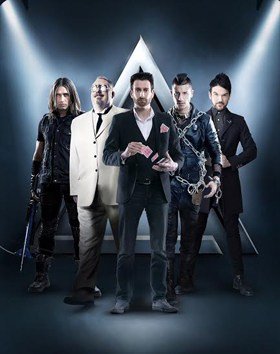 Ever since I was quite young, I was fascinated by illusion. I remember the excitement of going to a magic show as a kid, and still to this day I can’t help but get excited when I hear that a magician is about to feature on the telly.

The Illusionists ticked all the boxes for a perfect illusion show. Through the use of seven illusionists, the show was funny, clever and magical all at once.

Hosted by The Deductionist, Colin Cloud opened the show using numbers from random audience members and a calculator to correctly calculate today’s date and time. A great host and a great illusionist.

I was never hugely convinced of the illusions of Britain’s Got Talent’s Jamie Raven, and whilst a lovely, likeable character with a charming onstage presence, I’m not sure how much skill is behind his tricks. Surely the stage hands got that train on in the opening sequence!

The Inventor (Kevin James) produced a fun sketch, chopping a surgeon in half and stapling him back together. Lots of fun… wouldn’t call it magic, but I suppose an illusion nonetheless!

The Weapon Master (Ben Blaque) gave a ‘clinging-to-the-edge-of-my-seat performance’ – culminating in a trick where he shot an arrow through an apple on his own head! Very impressive and greatly skilled. That assistant must’ve had great trust to let him aim his crossbow in her direction!

The Manipulator had a more subtle approach to his illusions… very appreciative of the work, although I think I prefer a little bit more climactic action.

Andrew Basso as The Escapologist completed a trick inspired by Houdini. He spent three minutes under water… which is impressive enough for me! But he was also hanging upside down with his ankles locked and his hands chained together!

But I think that, as well as skill, it is the stage presence and showmanship which makes a stage illusionist so special. And that is why The Trickster (David Williamson) stole the show for me. With a bit of audience participation from four very brave children, David’s tricks themselves were not so impressive, but his superb comic timing and rapport with the audience had me in stitches. Fantastic family entertainment!

The show was accompanied by a live band and some very talented background dancers. Although I question how well it all gelled together.

A little different from what I normally see at the theatre, but definitely worth a visit. There really is something for everyone, child and adult alike.

THE ILLUSIONISTS – WITNESS THE IMPOSSIBLE – the world’s best-selling touring magic show which has sold out in 71 cities across 17 countries – comes to London’s West End for the first time, starring the UK’s hottest magician Jamie Raven. Fresh from Britain’s Got Talent, where he captivated the British public with his unique magic tricks, Jamie Raven joins this ground breaking spectacular showcasing the dazzling talents of seven of the most incredible illusionists on earth.

A rapid switch of Alex Roberts’ baseball cap from back to front, together with an appropriate change of pitch and accent, are all that is required for … END_OF_DOCUMENT_TOKEN_TO_BE_REPLACED

It’s a sad tale, as the audience is duly informed at the start of the show, but before it reaches the point of melancholy and woe, there are a lot of … END_OF_DOCUMENT_TOKEN_TO_BE_REPLACED

There is nothing in Lucy Porter’s show, or so Porter herself asserts, for the younger generation: it is all about her mid-life crisis and what she did … END_OF_DOCUMENT_TOKEN_TO_BE_REPLACED