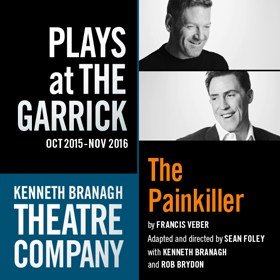 This adaptation of The Painkiller is so side-splittingly amusing that it is almost in danger of being better called ‘The Pain Causer’. It’s an extraordinary transformation from its original French version by Francis Veber into this British farce. A note in the programme from director and adaptor Sean Foley explains it was Veber’s insistence that an English language version of his ‘Le Contrat’ to be staged in London should not be a stuffy line-by-line translation of the original, but an adaptation with British English idioms and punchlines.

Ralph (Kenneth Branagh) and Dudley (Rob Brydon) are the central characters in this high-speed and high-energy comedy. Branagh and Brydon’s characters don’t, for the most part, go by these names, but I’m sticking with the cast list given in the programme and, as always, I mustn’t give too much away. The whole thing is superbly acted, with not a weak link in this (albeit small) cast. Of particular note is the Porter (Mark Hadfield), whose mannerisms and facial expressions become appropriately increasingly contorted as the scenes he walks into are incessantly more, ahem, compromising.

Dudley’s personal life is a mess for reasons that are quickly and obviously clear in the narrative, and Ralph, another guest in the same hotel in an adjoining room, suddenly finds Dudley outside on the window ledge. Here lies the beginning of a most unlikely alliance.

Dr Dent (Alex MacQueen) is asked to attend to Dudley by the Porter, who is following standard hotel procedure to be invoked in certain circumstances. Dent administers a jab that tranquilises Ralph (mistaken identity, y’see), but not enough to actually knock him out: he is, quite literally, all over the place in a sight to behold, slipping, sliding and spinning about the room much to the delight of the audience.

We also have a Policeman (Marcus Fraser, making not only his West End debut, but his professional debut), also called by the Porter (that pesky protocol again) who gets little chance to shine as he quickly ends up in a wardrobe. Quite how and why is an explanation best left for the show itself, should you wish to see it. Meanwhile, Michelle (Claudie Blakley), Dudley’s ex-wife, seems exasperated by practically everything – a source of audience laughter in itself.

The narrative doesn’t seem at all important here, ultimately – it’s the laughs that keep coming, even if it’s a bit formulaic and, plot-wise, predictable. The skilled cast perform so convincingly, however, that I still found myself completely absorbed in what was going on. Even so, my fellow theatregoer was convinced that the star-studded talent to be found in this cast was ‘wasted’ on the London stage. For my part, I will go as far as admitting that I didn’t feel much empathy with any of the characters at the end, but this didn’t stop me from having a good time.

Like any well-performed British ‘farce’, the timing is ridiculously exemplary. The script does, in places, feel quite dated, in comparison to, for instance, Mischief Theatre’s ‘The Play That Goes Wrong’. Just don’t expect anything remotely deep in what is purely light entertainment – ‘light’ being the operative word. A comical tour de force, The Painkiller is utterly joyous, and a pleasure to see. Not quite family viewing, mind you, but nonetheless almost relentlessly hysterical. Avoid if you like your theatregoing to be profound and insightful. But if escapism’s your thing, here’s one to seriously (or hilariously) consider.

Two men. Two lonely hotel rooms. An adjoining door. One of them is a killer. One of them wants to die. What could possibly go wrong?

A rapid switch of Alex Roberts’ baseball cap from back to front, together with an appropriate change of pitch and accent, are all that is required for … END_OF_DOCUMENT_TOKEN_TO_BE_REPLACED

It’s a sad tale, as the audience is duly informed at the start of the show, but before it reaches the point of melancholy and woe, there are a lot of … END_OF_DOCUMENT_TOKEN_TO_BE_REPLACED

There is nothing in Lucy Porter’s show, or so Porter herself asserts, for the younger generation: it is all about her mid-life crisis and what she did … END_OF_DOCUMENT_TOKEN_TO_BE_REPLACED