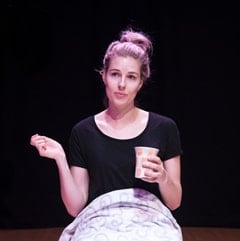 We all can feel an imbalance when our identities are tested, worlds shaken and the security of our home is at risk. The South Afreakins shares a unique story of a couple that takes life-changing risks to reclaim their identities and find a place they both can call home.

The South Afreakins by Robyn Paterson is a solo show that tells a story about a lovely couple – Gordon and Helene – who feel trapped in South Africa and decide to emigrate to New Zealand. Helene who is determined to make a new start in New Zealand encourages her husband to move. All the while, Gordon is perfectly content to stay right where he is in South Africa. This whimsical show reveals the humorous moments in a marriage, as well as the challenges a marriage can face in a lifetime.

The script and direction of this show was spot on. Gordon and Helene are a couple that anyone in a long-term relationship can relate too. They bicker as they go to sleep, but the love and commitment of their relationship never falters. The writing is quick and sharp as Paterson switches from Helene to Gordon in the blink of an eye.

Her distinction between the two vocally makes it clear when Gordon is talking rather than Helene. This show was devised beautifully and it is clear that the writing was well thought out.

The choice of having a painting of a tree on the side of the set to represent the tree planted for Gordon and Helene’s son was magnificent. It’s something so simple that it didn’t necessarily need to be in the show. However, it meant so much more in the end when she flipped the page to reveal two trees. This simple prop added something special to the story that we could see and acknowledge.

The time Paterson took to separate each character was brilliant. The hunched over shape of Gordon’s stance was different from Helene’s upright posture. Her characters are well developed and the story was emotionally heart-breaking. The clever and witty show The South Afreakins is a great reflection of how long-term marriages grow and evolve over time.

Helene and Gordon are stuck. Stuck in their arm chairs, stuck on their farm, and stuck in their rut.
Helene is determined to leave everything behind and start again in the sheep-filled hills of New Zealand. Gordon’s dream is to stay right where he is. When they finally immigrate to New Zealand, the result is heart-breaking and hilarious as they discover it’s hard work to find “home.” Sharply observed and wittingly composed, the South Afreakins is a dark comedic solo show about the lengths we go to in order to find our identity, the limits of what we would give up for the ones we love the most and the investments we are forced to make to find out where home actually is.

After a troublesome year of intermittent lockdown and cancelled productions, Theatre Royal Windsor finally reopened early in the summer with a … END_OF_DOCUMENT_TOKEN_TO_BE_REPLACED

“You have to know your history,” a fellow theatregoer remarked at the interval, in reference to understanding the various nuances in the dialogue. I … END_OF_DOCUMENT_TOKEN_TO_BE_REPLACED

The Questors' latest offering is a double-bill of Mike Bartlett plays; Bull & Contractions. The plays appear very timely, with the world returning … END_OF_DOCUMENT_TOKEN_TO_BE_REPLACED

All plays have a theme. Some have more than one and in the case of Suzan-Lori Parks’ play White Noise which has recently opened at the Bridge Theatre … END_OF_DOCUMENT_TOKEN_TO_BE_REPLACED