Home » Reviews » Vicki and Pat in Fuerteventura at Theatre503 | Review 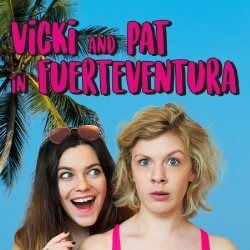 With the Edinburgh Festival now in full swing, talk has turned away from ice creams and BBQs and on to one more pressing subject which firmly takes centre stage: fringe theatre.

And whilst Edinburgh has its fair share of high-quality offerings at this time of year, it’s business as usual in London where the fringe scene is as vibrant as ever with some absolute gems taking place upstairs above pubs and downstairs within vaults.

Vicki and Pat in Fuerteventura is no exception and is already well seasoned having cut its teeth both above and below ground level, playing to audiences at the Hen and Chickens and the Underground fringe festival before a small but perfectly formed run at Theatre 503, which is where I found myself on a hot and sticky Sunday night in the capital.

Director Steve McCourt is no stranger to the fringe circuit, having worked both on and off-stage for a wide variety of productions so this succinct, one-hour offering was always in safe hands and does not disappoint. Set beside a pool in an all-inclusive holiday resort in sunny Fuerteventura, a chance meeting between two twenty-somethings both in search of some summer sun proves to be so, so much more.

Vicki (Rachael Henley) is a happy-go-lucky good time girl who loves nothing better than a soap opera and her Kimberley Walsh autobiography, but with plenty going on underneath the surface, her characterisation is far from one-dimensional. Armed to the hilt with an array of mindfulness apps and a plethora of breathing exercises, one feels that this trip to the Canary Islands was more than just a last-minute Teletext pack-n-go deal. And when Pat
(Ellen Chivers) stumbles into her sunbed with an entire chocolate gateau (well it is all inclusive after all!) Vicki’s holiday is about to change in a big way. Ellen Chivers’ comic timing is faultless. She has a natural ability to make even the most mundane of sentences utterly hilarious and does so with ease as she navigates her way through the snappy and staccato script. Scenes are fast-paced and move from one to the other at an enormous rate, and the chemistry between these two sun-worshippers is electric.

Vicki and Pat in Fuerteventura is a Benidorm-come-Carry On barrel of laughs that tugs at your heartstrings in all the right places. Bordering on a classic farce, this production has a clear identity – which is why I can’t help but feel that it has only just touched the surface. At an hour long, there is plenty of room for this piece of new writing to grow and it won’t be long before it takes on a life of its own.

Duck Decanter have firmly staked a claim as ‘the ones to watch’. Keep an eye out for this duo: they may just be lounging beside a pool near you. But whatever you do when you see them, don’t mention Happy Hour. They’re still recovering from last time.

Vicki and Pat in Fuerteventura is a two-woman comedy play in one act. Vicki and Pat meet after choosing adjacent sun loungers on an all-inclusive holiday in Fuerteventura. The pair fill us in on their adventures through their dialogue, such as the mysterious ‘Happy Hour’ they went to the night before which has left them the worse for wear, the aerobics class they were persuaded to join by the Activities Rep which ends in disaster and the entire gateau that Pat has stolen from the all-inclusive buffet. As she repeatedly insists, if it’s all-inclusive, it’s not stealing.
www.duckdecanterproductions.com