Home » Theatre News » You, Me and Everything Else at Soho Theatre – Review 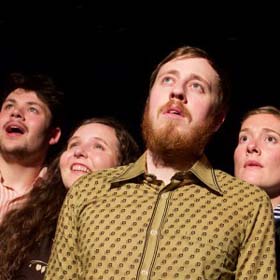 Sometimes as a reviewer the strangest thing happens and a show takes you completely by surprise. This was the case as I popped into the Soho Theatre to see the Camisado Club’s production You, Me and Everything Else.

In 1977 NASA launched a spacecraft that was destined to go out and leave our solar system taking with it a message from mankind to whoever and whatever was out there. This message was in the form of a ‘Golden Record’ and contained all sorts of things to tell ET and his/her buddies everything about the planet Earth. Deciding on the contents of the record was a team led by Dr Carl Sagan (Robert Nicholson) along with his wife Linda (Caroline Liversidge), Author Ann Druyan (Lauren Hurwood), writer Timothy Ferris (Adam Gibson) and various other luminaries of the time. As well as all being eminent people in their chosen field, this team all had one other thing in common, they were human. As they worked together assembling the components for the record, a romance starts to blossom under their noses as Carl and Ann gently fall in love.

I have to say that You, Me and Everything Else was a really excellent play. It is written by the cast – the four above and the Narrators (Hannah Goudie, Jessica Dawson and Jamie Tansley) – and is, in reality three individual stories beautifully interwoven into one play. First there is the story of the “golden Record” which is an amazing story in itself. This team had a very limited time to assemble as much as they could in the way of sounds and images to portray the diversity of life and culture on Earth. That they were able to do so in the time before Google and Wikipedia was testament to their dedication and skill. Secondly there is a love story as Carl and Ann’s life starts together while their current relationships crumble. Finally, there is the story of Voyager itself – brilliantly illustrated by the cast – as it wends its merry way out of the solar system and, as its systems fail one by one, into the endless sleep of deepest space. Portraying one of these stories effectively would be hard work but to do all three, in a one act play that runs for just over an hour, is amazing and I really applaud the cast/writers for their skill in pulling this off.

Whilst the set was basic, mainly three legged stools and cardboard boxes, it worked extremely well to illustrate the various places – everything from a coffee shop to a formal dinner party to the edge of the solar system, and Director Rebecca Frecknall keeps the pace moving beautifully so that the audience is never lost in time or place with the action. The cast are obviously good friends – the bonhomie really flows from the stage into the audience – especially during the spontaneous opening scene. All the way through, their performances are very natural – thankfully none of them tried putting on American or any other accents – and this gave a great sense of realism to the piece which kept my attention throughout. There is no real star in the show and if any of them were missing it would completely destroy the wonderful dynamic they have.

So, I went to the theatre expecting a nice easy one act show with an early finish so I could get back home in time for “Bake Off” and instead, I found You, Me and Everything Else, an excellently written and acted piece of storytelling that, using a variety of igneous and at times very unusual methods, kept me hooked from start to finish. Discussing it with my companion afterwards, we were both amazed at the skill and professionalism this wonderful ensemble displayed as they told the human story of two extraordinary people falling in love whilst sending a message to the stars for all mankind. A really amazing show about a truly awesome moment in the planet’s history.

If you could send a mixtape to outer space, on behalf of planet Earth, what would be on it?

Right now, there’s a golden record hurtling through space. It’s about you and me. You, me and the world. You, me and the universe. It’s a mixtape of humanity, a collection of songs, sounds and pictures from Earth, a valentine from the human race to whoever or whatever finds it.