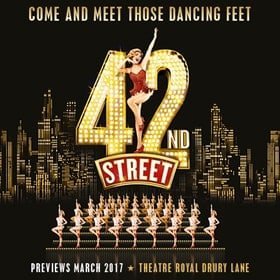 Gower Champion’s original London production of this classic backstage musical hit the boards in 1984, and this time co-writer Mark Bramble is bringing his spectacular revival to the same theatre, Drury Lane’s Theatre Royal, opening 4th April (previewing in March) and all the indications are that this is going to be the theatrical event of the year – possibly of the decade.

It features the old favourite songs like ‘We’re in the Money’, ‘Lullaby of Broadway’, and, of course, ‘42nd Street‘, and a special treat – the classic ‘I Only Have Eyes For You’, beautifully performed by that amazing songstress Sheena Easton whose powerful voice will be gracing the West End stage for the first time. In rehearsal Easton gives a powerful rendition of the number – and she is joined in the cast by Tom Lister as Broadway Producer Julian Marsh and Clare Halse as wannabe starlet Peggy Sawyer.

But that’s not all that Bramble is conjuring out of his magical box of theatrical tricks. This production boasts the largest ever cast for this show – seeing over forty hoofers belting out the opening mesmerising tap number, choreographed by Randy Skinner, tells us that this is going to be something special, even by the high standards of the astounding treasure-trove of current West End musicals. Interestingly Bramble says that standards of
dancing in London nowadays are as high as anywhere in the world which wasn’t the case in 1984 when special dispensation was sought from Equity to recruit from Dance schools.

The twenty-piece band, I am reliably informed, will be the largest on the London stage whilst visually, judging by the photographs displayed in the rehearsal studio, the production is going to be stunning. Costume designer Roger Kirk has ensured that the cast will be immersed in a surge of sequins, feathers, jewels and beads – sourced from all over the world – and scenic designer, Douglas W. Schmidt, bucks the current trend of purpose-built 3-d sets returning to that magical world of painted scenery. And what painting!

The original production paid homage to the black and white movies of the thirties whereas Schmidt and Bramble have gone for the classic MGM Technicolor® look to astonishing effect. And what about the Miss-Saigon-helicopter-moment? Schmidt has come up with the delicious idea of a grandiose mirror over the stage so that when this spell-binding troupe of eye-dazzling dancers do their Busby Berkeley inspired patterns on the floor the mirror swivels into place so that the audience get the full effect of the view from above. Ingenious.

42nd Street is going to be Showbiz Unchained, an antidote to the darkness that is overshadowing our times, a veritable feast for the eyes, a tonic for the ears and a stimulant for all the senses: I guarantee that audiences will not be able to stop themselves from dancing away from the theatre at the end of the show.

After creating the “absorbing and provocative” Version 2.0 and the “eminently lovable” Letters, Kashyap Raja returns to London with his new play Earth … END_OF_DOCUMENT_TOKEN_TO_BE_REPLACED