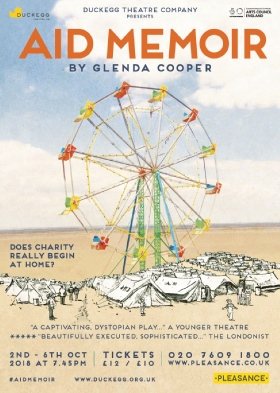 Duckegg Theatre Company presents the London run of Aid Memoir – a new production playing with the way we see humanitarian disaster and asks what if Britain was a country receiving aid from Africa?

Martine, an aid worker from Kenya is running a refugee camp in the UK, a country in the grip of a humanitarian disaster. She is desperate to help Chelle, a 17-year-old refugee. Potential salvation appears in the form of Taz, a showbiz journalist who has come from Kenya to launch an appeal – but Taz and Martine have history… This play looks at the patronising attitudes taken to those who have found themselves in humanitarian crisis. Are some disasters more ‘worthy’ than others?

Dr Glenda Cooper is a writer, journalist and lecturer at City, University of London. Aid Memoir draws on her extensive experience as a former BBC and national newspaper journalist and as an aid worker for an international NGO. She said: “The point of the play is not to excoriate aid workers or journalists – most of whom do their best when covering these stories – but to challenge us, the public about our attitudes to aid. The fact remains that we give more money to disasters that are easy to understand, have a well-known celebrity or a photogenic picture – too easily dismiss who we think is unworthy. So next time you watch a disaster unfold on screen – as it is currently in South Sudan, Syria or Colombia – ask yourself what if that crisis was in Southend, Sunderland or Croydon? Would we see a difference?”

Duckegg Theatre Company is a Social Enterprise, with its roots in Scunthorpe, dedicated to the creation and touring of new writing with young people at its heart. Their most recent production achievements include “Leave Hitler to Me, Lad” (UK Tour and West End), Peter Pan (UK Tour) and The Safe Zone (Northern Tour). Their education department – the Acting School – is a thriving community of over 500 young people from across Yorkshire and the Humber taking part in regular theatre classes, professional productions, LAMDA examinations, the Arts Award and projects. They are the lifeblood of the company and are rightfully placed at the heart of everything they do.

Produced by Haley Muralee, of Duckegg Theatre Company, Aid Memoir takes a suitably Northern slant, but its a message that will resonate across the country. She said: “The play really spoke to us, not only in terms of it being set near us in Cleethorpes, but also in terms of what the feeling is in our community post-Brexit. The young people in our youth theatre strongly feel there is a generational divide in terms of the feeling towards immigration in the area, and this is something they wanted to tackle head-on through their arts’ work. The cast features two professional actors working alongside four members of the youth theatre, as well as a member of the youth theatre assistant directing the production.”

Following on from the return of the critically-acclaimed, five-star production of Cyrano de Bergerac, The Jamie Lloyd Company brings Chekhov’s tale of … END_OF_DOCUMENT_TOKEN_TO_BE_REPLACED

THE PHANTOM OF THE OPERA at Her Majesty’s Theatre is delighted to announce that booking is extended to Saturday 4 March 2023, with a new performance … END_OF_DOCUMENT_TOKEN_TO_BE_REPLACED

Producer Runaway Entertainment is delighted to announce that the critically acclaimed, smash hit, supernatural thriller 2:22 - A Ghost Story will … END_OF_DOCUMENT_TOKEN_TO_BE_REPLACED