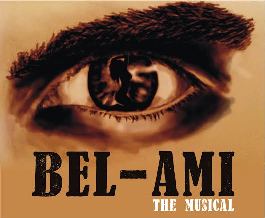 The new musical Bel-Ami will receive its world premiere at Charing Cross Theatre on 19th February 2014. The production is a new take on the classic Guy de Maupassant novel by award-winning composer Alex Loveless. Presented by the London College of Music (LCM) it will run 19th February to 1st March 2014.

A present-day satire on celebrity, press corruption and politics, the show is set against the fictional backdrop of a US-led invasion of Iran. Its contemporary score includes rap, dance, rock and RnB.

Disillusioned former soldier George Dury joins the ranks of his friend’s newspaper, quickly becoming the editor of the celebrity gossip column ‘Bel-Ami’. Manipulating his way into the highest echelons of British society by charming, seducing and blackmailing those who cross his path, he is rewarded with ever-increasing wealth and prestige. But his ultimate goal will always be power.

Bel-Ami is the first university production to be staged in the West End. Part of the University of West London, LCM has a long-standing tradition of developing new musicals.

Alex Loveless, an alumnus of LCM, has showcased his work at the Park Theatre, Theatre Royal Drury Lane and the Royal Academy of Music. He said: “This show is very special to me. To be given the opportunity to stage Bel-Ami in the West End is an honour, both for me and the students. With its diverse score and a great blend of characters, the musical will truly come alive on stage.”

The production is directed by Chris Loveless, designed by Laura Clark with choreography by Anthony Whiteman. Orchestration is by Andy Smith and the musical director is George Carter, both alumnus of LCM.

David Henson, Head of Subject for Performance, Composition and Performing Arts at LCM, comments: “This West End production is a University first which is thrilling for everyone. LCM supports the music industry, making every effort to give new writers a platform for their work. Alex’s modern re-telling of this classic story cleverly brings it to life in a way that I’m sure audiences will love.”

Running time: Approximately 2 hours 30 minutes including one interval.
Bel-Ami is suitable for ages 14+

Following on from the return of the critically-acclaimed, five-star production of Cyrano de Bergerac, The Jamie Lloyd Company brings Chekhov’s tale of … END_OF_DOCUMENT_TOKEN_TO_BE_REPLACED

THE PHANTOM OF THE OPERA at Her Majesty’s Theatre is delighted to announce that booking is extended to Saturday 4 March 2023, with a new performance … END_OF_DOCUMENT_TOKEN_TO_BE_REPLACED

Producer Runaway Entertainment is delighted to announce that the critically acclaimed, smash hit, supernatural thriller 2:22 - A Ghost Story will … END_OF_DOCUMENT_TOKEN_TO_BE_REPLACED