Producer Josh Andrews has today announced the lead cast for the UK tour of Peter James’ Wish You Were Dead: George Rainsford, will star as James’ famous detective DSI Roy Grace, alongside Giovanna Fletcher who will star as Cleo Morey and Clive Mantle, who will star as Curtis. Leon Stewart will return to the role of DS Glenn Branson. 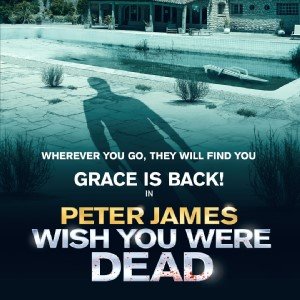 The world stage premiere of Wish You Were Dead follows five successful stage plays and the critically acclaimed smash-hit primetime ITV series ‘Grace’, which are all based on the best-selling novels by the UK’s number one crime author Peter James. This will be the sixth stage adaptation of James’ novels -making it the most successful crime thriller stage franchise since Agatha Christie.

Adapted exclusively for the stage, Wish You Were Dead kicks off a major nationwide UK tour in February 2023 at the Churchill Theatre, Bromley. The production will then travel to a selection of top theatres across the country until late July. Tickets are on sale now from PeterJames.com.

Giovanna Fletcher is a hugely successful author, podcast host and Queen of The Castle after winning I’m a Celebrity Get Me Out of Here in 2020, Giovanna’s theatrical credits include 2:22 A Ghost Story and Ivanov in the West End and she also appears in the feature film The Boat That Rocked.

Clive Mantle’s extensive range of credits across theatre, film and television, include an Olivier Award nominated performance in Of Mice and Men. He is perhaps best known for his TV work in shows such as Casualty, Holby City, Game of Thrones and The Vicar of Dibley and is also an award-winning children’s author.

George Rainsford has for the last nine years, been playing series regular Ethan Hardy in Casualty on BBC One, for which he won the Inside Soap Award Best Drama Star 2017. Other Television credits include Holby City and Call the Midwife and his numerous theatre credits include productions at the National Theatre, RSC and the Old Vic.

George Rainsford said: “I can’t wait to be part of a theatre ensemble again and delve into Peter James’ thrilling criminal underworld. Getting to play Roy Grace, his most renowned detective creation, will be a huge honour. I am excited to meet audiences from all over the UK, and share with them some enthralling, edge-of-your-seat entertainment!”

Clive Mantle said: “I’m looking forward to terrifying… I mean entertaining… audiences up and down the length and breadth of Britain with ‘Wish You Were Dead’. Full of suspense and drama, there will be many funny moments too during the course of a captivating evening. There’s a clue there for starters. Roll up, roll up, all you amateur sleuths. Can’t wait to see you all.”

Giovanna Fletcher said: “I’m really looking forward to appearing on stage as Cleo in this brand new play, and excited to work with George and Clive – two wonderful actors I’ve heard great things about. As a novelist, I know how important the characters I create are to me, so I’m thrilled Peter James has entrusted me with this wonderful role, in what is another brilliant and gripping story from one of the greatest masters of crime thrillers!”

Writer Peter James said: “I am beyond thrilled with the wonderful star cast that we have assembled for the world stage premiere of Wish You Were Dead. I love the fact that so many people create their own image of my characters but for me, George, Giovanna and Clive are all inspired interpretations of how I see Roy Grace, Cleo and Curtis and I am equally thrilled that Leon is returning to play Branson again. It is going to be very exciting to work with this great group of actors and I can’t wait for them to give audiences around the country, a thrilling, fun and hugely entertaining night at the theatre.”

The gripping television series ‘Grace’ was an immediate success with audiences when it launched on ITV in 2021, with almost nine million viewers tuning in to watch the primetime drama starring John Simm as DSI Roy Grace. Series two returned to TV screens in spring this year, with five more thrilling episodes

being the most watched programme across all channels on each of the Sundays they were broadcast. A third series is now in the works.

The stage play of Wish You Were Dead follows DSI Roy Grace and Cleo Morey as they take a much needed holiday together. They are hoping for a few days away from their dark worlds of murder and the mortuary. But their dream escape turns out to be the holiday from hell, as the past comes back to haunt them.

Produced by Josh Andrews and Peter James and adapted by award winning writer Shaun McKenna, who has adapted the five previous Peter James plays, the production will also reunite the creative team from Looking Good Dead, with Jonathan O’Boyle directing, Design by Michael Holt, Lighting by Jason Taylor and Sound by Max Pappenheim.

Peter James is a number one bestselling author of crime and thriller novels and the creator of the much loved Detective Superintendent Roy Grace. He has topped the Sunday Times bestseller list 19 times and has achieved global book sales of over 21 million copies which have been translated into 37 languages. Synonymous with plot twisting page turners, he has garnered an army of loyal fans throughout his storytelling career which also included writing for TV and producing films. He has won over 40 awards for his work, including the WHSmith Best Crime Author of All Time Award, Crime Writers’ Association Diamond Dagger and a BAFTA nomination for The Merchant of Venice starring Al Pacino and Jeremy Irons, which he also executive produced.

'Look anyone will tell you, I’m a pretty straight sort of guy.' Tony Blair A reckless reappraisal of the life of former Ugly Rumours front man and … END_OF_DOCUMENT_TOKEN_TO_BE_REPLACED

Michael Harrison and the Really Useful Group are thrilled to announce that The Wizard of Oz, the musical based on the iconic story by L. Frank Baum, … END_OF_DOCUMENT_TOKEN_TO_BE_REPLACED

Following major demand for tickets, the Queen of comedy Dawn French has announced a host of new UK tour dates for her critically acclaimed live … END_OF_DOCUMENT_TOKEN_TO_BE_REPLACED