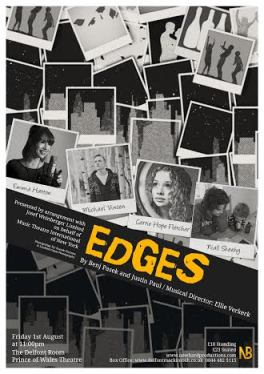 Taking place each month from August to November, there will be a new concert for one night only in the Prince of Wales Theatre’s intimate cabaret space, The Delfont Room. Edges is the first concert performance in the inaugural season, on Friday 1st August 2014 at 11pm.

Edges is a contemporary musical that confronts the trials and tribulations that young adults in their twenties may encounter. The songs, which cover universal issues such as love, commitment and the search for identity, are both comical and moving.

If you have ever aspired for something greater, missed old friends, been afraid to grow up, addicted to Facebook or scared to say “I love you” then this show is for you!

The cast of four from Edges:  Emma Hatton, Carrie Hope Fletcher,  Niall Sheehy and Michael Vinsen – answered a few questions that were put to them this week, and this is what they had to say.

NIALL SHEEHY
You are in the cast of Miss Saigon, which has recently opened in London. What is it like being a part of the show?
It’s a tremendous honour to be a part of this production. Miss Saigon is an iconic show that tells a genuinely moving story and to be part of something like that is what an actor dreams of. The show has been so well received and with the Vietnam War being such a recent event in history, it fills me with immense pride to be able to say I am a part of it all.

You are covering the role of Chris in Miss Saigon, for those that don’t know the story, what can you tell us about the role?
Chris is a young marine who has become jaded by the American’s, and his own, involvement in the Vietnam War. He has become cynical towards the way of life he and his fellow G.I.’s lead but when he meets an innocent and pure young girl named Kim, he begins to see that there is beauty and hope in a place he didn’t think possible. He takes it on himself to try to save Kim from a potentially doomed life and also hopes that in doing so, he can maybe find peace in himself.

On a daily basis, and for each performance, what does “covering the role of Chris” entail?
I perform as part of the ensemble, so my daily routine is the same as everyone else’s; I arrive and warm-up for the evening’s show and on the off chance that Alistair is sick, injured or on holidays, I step in for him and play the role until his return.

You will shortly be appearing in Edges as “Man 2”, for one night only at the Delfont Room, Prince of Wales Theatre.
What can you tell us about your role and how he fits into the storyline?
As it’s a song cycle, the show itself doesn’t have one specific storyline, per sé, so my role varies from song to song. There are comedic characters as well as more serious roles within the piece, which means there is something for everyone in the show.

What attracted you to take a part in Edges?
It was a genuine pleasure to be approached about the project. I was familiar with the piece and it is a great opportunity to perform some beautifully written and intricate music. Also, having the opportunity to work with Michael, Emma and Carrie, as well as our MD, Ellie Verkerk, was exciting as it’s a really talented group of people that has been assembled, so I’m honoured to be working alongside them all.

The cast of Edges includes Emma Hatton, Carrie Hope Fletcher, Michael Vinsen and yourself. All of you have roles in shows in the West End, when will you be able to make time to rehearse for Edges?
I won’t lie and say we have an abundance of time, as we all have busy and differing schedules, but we also don’t have the longest working hours in the world. We rehearse for the show during the morning/afternoon which leaves us plenty of time to get to work in the evenings. Don’t worry; we’ll be ready!!

This is a one night only performance, and late at night, why should everyone try to get along to see the show?
As I said, “Edges” has a wonderfully vast spectrum of songs. From comedy numbers to romantic ballads to intricate three or four-part harmonies, the show has something for everybody. It promises to be a wonderful and entertaining night, thanks to Pasek & Paul’s beautiful score. We’re all very excited to show people.

What are you looking forward to most about performing in Edges?

EMMA HATTON
What I’m most looking forward to is singing some beautiful, hidden gems within musical theatre, in an intimate, classy environment, alongside some extremely talented performers who make you raise your game. These songs are challenging but so rewarding when they come together. New Bard Productions are a fantastic new company and I’m extremely proud to be working with them.

MICHAEL VINSEN
The music! As a performer it’s great to get the chance to sing contemporary musical theatre pieces that are relevant to your own experiences. The music in this show is so catchy and it’s a joy to sing. I only wish I could sing it more!

CARRIE HOPE FLETCHER
I am most looking forward to singing with three hugely talented and lovely people and sharing a stage for a second time with Mr Sheehy after having recently been in Les Mis with him. I’d also only heard one or two songs from Edges before we started and since then I’ve fallen in love with the songs so I feel hugely lucky to be one of the four who get to perform them on August 1st!