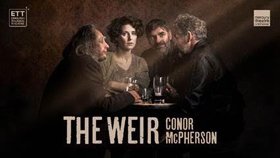 Conor McPherson’s Olivier Award-winning play The Weir, is at Richmond Theatre on Tue 27 Feb – Sat 3 Mar. Press are invited to attend for review on Tue 27 Feb at 7.30pm.

A shadowy tale delving into the dark corners of human lives, The Weir is a co-production between English Touring Theatre and Mercury Theatre Colchester.

In a small Irish town, the locals exchange stories round the crackling fire of Brendan’s pub to while away the hours one stormy night. As the beer and whisky flows, the arrival of a young stranger, haunted by a secret from her past, turns the tales of folklore into something more unsettling. One story, however, is more chilling and more real than any of them could have ever imagined.

Playwright and screenwriter, Conor McPherson has won several awards including the George Devine Award, Stewart Parker Award and an Olivier Award. His credits for theatre include The Veil (National Theatre), The Dance of Death (Trafalgar Studios), The Night Alive (Donmar Warehouse, Atlantic Theater, New York) and The Girl from the North Country (Old Vic). For film, his credits include The Eclipse and Strangers and his television work includes Paula. He is currently working on the screenplay Double Cross.

Louis Dempsey plays Finbar. His theatre credits include Stones in His Pockets (Vienna’s English Theatre), The Taming of the Shrew (Shakespeare’s Globe), Juno and the Paycock (Liverpool Everyman/Bristol Old Vic Co-Production), The Seafarer (Perth Theatre and Lyric Belfast), Some Voices (Young Vic), Wing And A Prayer (BAC), Last Apache Reunion (The Tobacco Factory) and Brothers Of The Brush (Liverpool Everyman). Television credits include Dream Team, Sea Of Souls, Omagh and The Bench. For film, his credits include Us and Them, Legend, Cloud Atlas, Grabbers, Six Bullets, Revolver, The Last Drop, Spivs, Troy and Shooters.

Sean Murray plays Jack. Credits for theatre include, A Tale of Two Cities (Royal & Derngate, Northampton and UK tour), The Hook (Royal & Derngate, Northampton), The Armour (Defibrillator at the Langham Hotel), Holy Warriors (Shakespeare’s Globe), The Double and The Tempest (Theatre Royal, Bath), Romeo and Juliet and The Importance of Being Earnest (Royal Lyceum, Edinburgh), Othello, The Comedy of Errors, Tartuffe, School for Scandal, The Rivals and The Life of Galileo (Bristol Old Vic), A Woman Killed with Kindness, The Phoenician Women, Romeo and Juliet and Two Gentlemen of Verona, The Cherry Orchard (RSC), Jane Eyre (The Ambassadors Theatre, Trafalgar Studios 1), The Terrible Voice of Satan (Royal Court), The Crucible (UK tour) and Buried Child (National Theatre). Television credits include Robin Hood, Dunkirk, Without Motive and Berkeley Square. Film credits include Hamlet, A Rather English Marriage and Finding Mallory. Regular appearances on BBC Radio 4.