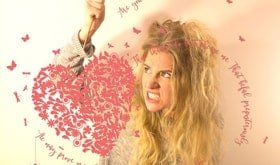 Fourteen years have passed since the fateful night Thisbe’s parents, Helena and Demetrius, were lost in the woods. The only thing they remember is waking up completely in love with one another. But as their love becomes obsession, where does this leave their neglected and confused daughter, Thisbe?

Cue the prankster Puck and his fairy flunkeys who love nothing more than to meddle with the mortal world. With the promise of solving all of her problems, they lure Thisbe into the woods where it isn’t long before she finds herself embroiled in their roguery. Intoxicated with magic and adventure, has Thisbe gone too far this time? Can she stop her family falling apart? And does she even want to? Featuring creatively integrated BSL (British Sign Language) and with an original score, this play is full of playful wit and boisterous theatricality.

Thisbe is written by Samantha Sutherland, directed by Roberta Zuric, musical direction by David Hewson, BSL interpretation by Jennifer Wilson, and is produced by Euan Borland. Thisbe premiered at the VAULT Festival 2016.

“Thisbe’s tale starts from where Shakespeare’s A Midsummer Night’s Dream left off. We revisit some familiar characters but focus on Helena and Demetrius’ daughter Thisbe. I had been scribbling ideas about the fate of Demetrius and Helena since I performed in A Midsummer Nights Dream when I was 11. It struck me then (I was playing Helena) that her happy ending didn’t quite feel right. Demetrius didn’t love Helena through his own volition. It felt like an unfinished story”, said Thisbe’s writer Samantha Sutherland.

“Door Ajar’s Thisbe is a fusion of a magic, music and levity which reminds us why Midsummer’s is so much fun while still feeling totally new. Comic and heartfelt performances from a multi-talented, character-changing, instrument-swapping cast keep the energy going throughout – a real joy to experience“, said Mat Burt VAULT Festival Director.

Samantha Sutherland recently took time out to chat about the production. This is what she had to say.

Q: What was it about Demetrius and Helena that inspired you to want to write about them and their daughter?
Samantha: I performed in A Midsummer Night’s Dream when I was 11. I played Helena. I remember thinking, ‘this ending doesn’t feel right’! Hermia and Lysander’s love is organic and authentic yet the love that Demetrius feels for Helena is manufactured by mischievous fairies! I started to wonder… what would their marriage look like years later? Would Demetrius’ love still be as potent as at the beginning of a relationship? Or would the spell mature? And so the character of Thisbe was born – their daughter. These questions are answered by watching her side of the story.

Q: How has the story evolved since its inception?
Samantha: The biggest development for us has been the insertion of BSL (British sign language) integration. Our cast member, Jennifer Wilson interpreted a single performance for us at Vault Festival last year. Despite only appearing for the one performance her work left a big impression on us and we agreed that if we were to resurrect the play, we would want Jennifer to be fully integrated into the piece as a character in her own right. BSL is so visually stimulating and creative, a form of communication that lends itself so well to poetic devices such as Shakespeare and actor-musicianship. We think we have a killer combination going on!

Q: What can you tell us about Thisbe?
Samantha: Thisbe is the story of Helena and Demetrius’ daughter. Told by an ensemble of 6 actor-musicians with BSL interpretation, the style is larger than life, playful and quick-witted. Actor-musicians play the characters but also play musical instruments – bringing the story alive through song and music. The show examines the different types of love, coming-of-age and most importantly answers the question – can Helena and Demetrius’ magic-induced love last?

Q: How do you think the production relates and reflects society today?
Samantha: Coming-of-age stories will always be relevant because there will always be teenagers that are angry with their parents! And going on their journey to adulthood. How does it feel to have responsibilities for the first time? If you were given the choice to change your life for the better but with the consequence of hurting people close to you – would you take it? Thisbe is faced with this dilemma.
And as a generation, our attitude is more open towards different types of love – magic-induced or not, can romantic love last?

Q: What do you want the audience to take away from the production?
Samantha: We want the audience to leave humming the Thisbe music with a skip in their step and some magic in their hearts! To be pondering romantic love vs. companionable love and feeling satisfied that the question left hanging at the end of A Midsummer Night’s Dream has been answered.

New dates are announced today for the return of Agatha Christie’s Witness for the Prosecution at London County Hall on the Southbank. As the … END_OF_DOCUMENT_TOKEN_TO_BE_REPLACED

5North and Ellie Keel Productions’ Written on the Waves, a series of world premiere audio plays – the penultimate play, and first for a family … END_OF_DOCUMENT_TOKEN_TO_BE_REPLACED

Sonia Friedman Productions announces the dates for the RE:EMERGE season as priority booking opens on 15 April at 10.30am, with public booking opening … END_OF_DOCUMENT_TOKEN_TO_BE_REPLACED

Disney Theatrical Productions today announces that Frozen is back on sale to the public, opening at the newly refurbished Theatre Royal Drury Lane on … END_OF_DOCUMENT_TOKEN_TO_BE_REPLACED