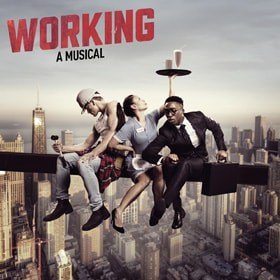 The European Premiere of WORKING will open at Southwark Playhouse on 7th June 2017, with previews from 2nd June, for a strictly limited season ending 8th July 2017.

WORKING is the extraordinary genre-defining musical from Grammy and Academy Award-winner Stephen Schwartz(Wicked, Godspell) based on Studs Terkel’s best-selling book of interviews with the American workforce: Working: People Talk About What They Do All Day and How They Feel About What They Do.

This highly original and universal portrait of the American workday is told from the perspective of those that the world so often overlooks – the schoolteacher, the housewife, the fireman and the waitress amongst many – whose daily grind and aspirations reflect the truths of the people that make up a nation. WORKING employs a range of musical styles and genres from contributing composers, including five-time Grammy Award-winner James Taylor and Pulitzer Prize-winner Lin Manuel Miranda (Hamilton, In The Heights).

Stephen Schwartz said of his new producers, “I am delighted that such a talented and distinguished theatre company will be presenting WORKING in London. I look forward to collaborating with them to ensure that the show is both entertaining and relevant to the contemporary British audience.”

Stephen Schwartz is best known for writing and composing the Tony, Olivier and Grammy Award-winning musical Wicked. Other shows for which he wrote music and lyrics include Pippin, The Baker’s Wife and Children of Eden. In film, he collaborated with Alan Menken on the songs for Disney’s Enchanted, as well as the animated features Pocahontas and The Hunchback of Notre Dame, and wrote the songs for the DreamWorks animated feature The Prince of Egypt. Schwartz has won the Drama Desk Award for Outstanding Lyrics, three Grammy Awards, three Academy Awards and has been nominated for six Tony Awards. He received the 2015 Isabelle Stevenson Award, a special Tony Award, for his commitment to serving artists and fostering new talent.

Luke Sheppard directed the Olivier Award-winning production of In the Heights (King’s Cross Theatre and Southwark Playhouse), for which he was nominated for Best Director at the Whatsonstage Awards, Night Must Fall (UK Tour) Stig of the Dump (UK Tour), Casa Valentina (Southwark Playhouse), The Secret Diary of Adrian Mole Aged 13¾ (Curve, Leicester) and the forthcoming European premiere of Peter and the Starcatcher (Royal & Derngate, Northampton). Luke is the Associate Director of Matilda (Stratford-Upon-Avon, West End, Broadway).

WORKING first opened on Broadway in 1978, under the direction of Stephen Schwartz, with a cast including Patti LuPone, Bob Gunton, Joe Mantegna, David Patrick Kelly and Rex Everhart. The show has since undergone several revisions, with additional songs by Lin Manuel Miranda being introduced in 2009. WORKING was last performed off-Broadway in December 2012, under the direction of Gordon Greenberg (Holiday Inn, Guys and Dolls, Jacques Brel Is Alive and Well and Living in Paris).

Sir David Suchet makes his eagerly awaited return to UK stages in POIROT AND MORE, A RETROSPECTIVE this autumn (2021). Following a successful tour of … END_OF_DOCUMENT_TOKEN_TO_BE_REPLACED

Selladoor Worldwide is delighted to cheer on the full cast of BRING IT ON THE MUSICAL, who will be joining musical theatre and TV star Amber Davies as … END_OF_DOCUMENT_TOKEN_TO_BE_REPLACED