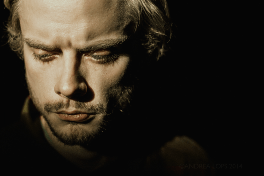 Written by Sevan K. Greene and Directed by Jonny Collis with Jack Morris as Simon and Henry Regan as Buck.

On the 3rd September 1916, Simon, an Englishman raised in India, and Buck, a ‘trench-rat’ from Ireland, are alone in the middle of the Battle of Guillemont. Trapped in a trench, one bleeds losing the threads of reality while the other must face the reality of the war. In order to survive the night they must learn not only to overcome the enemy, but also the stranger sitting next to them. The gritty and visceral reality of the trenches comes to life in this new play which examines how war exposes the humanity in a man, rather than the monster.

“As a survivor of two wars myself, there is a shared empathy and understanding that moves across borders. It’s a bold and exciting move to have a playwright of ethnic origin writing about something so quintessentially British. I’m encouraged by the way the production team are approaching this project, and thrilled to be part of this new wave of London theatre.”    Playwright, Sevan K. Greene

JACK MORRIS – SIMON
Jack Morris (Simon) studied for one year at Richmond Drama School then at The Rose, Kingston for their youth company, Picklock. He went on to film The Bill, Eastenders and Life of Crime and was nominated for best actor in the ‘Offie’ Awards for The Revenger’s Tragedy.

JONNY COLLIS, DIRECTOR:
Jonny Collis, professionally trained with Italian theatre practitioner Gianpeirro Borgia (ITACA), in performance, direction, and ensemble. This will mark his professional directorial debut. As an actor he performed across the UK, Europe and New York. Jonny is the Artistic Director of COG ARTSpace. With a clear artistic vision, this production will set the professional tone, and the artistic quality of the theatre going forward.

VERTICAL LINE THEATRE
Vertical Line Theatre is an award-winning company formed in 2010 with the aim of nurturing and developing innovative new writing and their writers through our flagship events: Creating Lines, Old Red Line & LineUp. With a history of producing work in London and touring productions nationally we are currently supported artists of Greenwich Theatre. Our desire is to develop a creative network of emerging talent to share opportunities, build careers and make work that challenges and inspires.