Each night for a week two different monologues written by Ian Dixon Potter will be performed. I watched Call Back and Trivial Dispute. 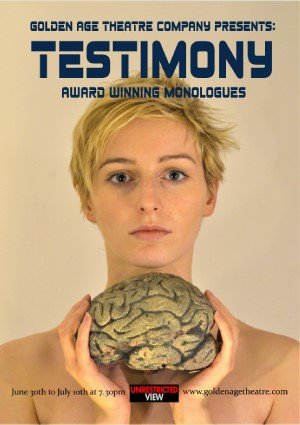 Call Back is about a man who discovers he has the power to make phone calls to the past, exactly 4 days before the present, so why is nothing changing when he warns of a terrible accident, and why has the weather suddenly got so bad? A whistle-stop tour of theoretical physics later and we have our answer and a new more political plot is hatched. The story was gripping and, geek that I am, I found the physics pretty fascinating too. The monologue was well performed by Diljohn Singh who encapsulated the cocky, quirky phone repair man he was playing although occasionally instances of poor diction meant I think I missed some of the jokes.

The second monologue was Trivial Dispute performed by Neil Summerville. I particularly enjoyed this story which ended with a twist, keeping me hooked throughout. Trevor, a retired car mechanic and proud Brexiteer finds himself out of his depth when he meets Ewan, whose political views don’t align with his own. What starts as a petty dispute over some ignored text messages quickly escalates over social media with shocking consequences. Summerville is completely believable in his role, and although the characters sometimes lack depth, the overall experience is a positive one.

Overall, I thoroughly enjoyed my evening at Testimony, and whilst the two monologues I saw will not be performed again, if they are a sign of things to come, I can guarantee an enjoyable evening out.

TRIVIAL DISPUTE: Two worlds collide when self made millionaire Trevor, committed Tory and card carrying Brexiteer, suddenly finds himself at odds with a retired academic, the cosmopolitan and liberal minded Ewan.

CALL BACK: After a botched attempt to repair a damaged smartphone, Ismail has discovered a means of sending a message backwards in time. How is his serendipitous discovery linked to a series of freak storms and a mysterious epidemic which are devastating a small English town?

18 Award-winning monologues about love, death, revenge and other serious matters

Although not entirely perfect, this staging – the first ever in the UK – of Pablo Sorozabal’s Zarzuela (Spanish Operetta) is brilliant, atmospheric, … END_OF_DOCUMENT_TOKEN_TO_BE_REPLACED

With well over three thousand productions at the Edinburgh Festival Fringe 2022, here’s my attempt at a list of recommendations. I Wish My Life … END_OF_DOCUMENT_TOKEN_TO_BE_REPLACED