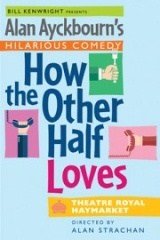 Produced by Bill Kenwright, a new revival of Alan Ayckbourn’s comedy How the Other Half Loves has been announced for the Theatre Royal Haymarket from 23rd March to 21st June 2016, with the official opening on 31st March 2016.

“As Bob and Fiona clumsily try to cover up their affair, their spouses’ intervention only adds to the confusion. William and Mary Featherstone become stuck in the middle, falsely accused of adultery and with no idea as to how they’ve become involved. The plot culminates in two disastrous dinner parties on successive nights, shown at the same time, after which the future of all three couples seems in jeopardy…”

How The Other Half Loves concerns three couples: Frank and Fiona Foster; Bob and Teresa Phillips; William and Mary Featherstone. Frank employs both Bob and William and is considering promoting the latter. Bob is having an affair with Frank’s wife Fiona and is in constant conflict with his own wife, Teresa. She feels Bob is neglecting her while she raises their baby and is suspicious of his actions and phantom phone-calls made to the house. When he returns late, she confronts him about his actions and he lies that he has been comforting work associate William, who believes his wife Mary is having an affair.

Frank and Fiona’s relationship is in stark contrast to the torrid emotions of Bob and Teresa’s. They share a polite, distant and evasive relationship and when Frank asks Fiona where she has also been, she says she has been comforting Mary – who she barely knows – who apparently believes William is having an affair. Of course, William and Mary are innocent parties and neither of the adulterers realise they have both implicated the Featherstones in their alibis. Both parties swear their partners to secrecy – particularly as both couples are entertaining the Featherstones on successive nights.

How The Other Half Loves Alan Ayckbourn (The Dinner Scene)

Read more about How The Other Half Loves…