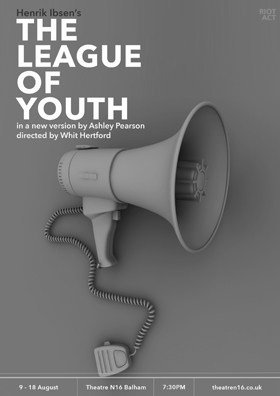 Riot Act unearths the rarely produced The League of Youth by Henrik Ibsen for its third professional production in the UK since its 1870 publication. This blisteringly relevant and razor sharp dissection of cultural and professional revolution where old institutions are forced to face the radical new is here presented in a new adaptation by Ashley Pearson and directed by Whit Hertford, the team behind this year’s fringe sell-out Coverage, a newsroom adaptation of William Shakespeare’s Julius Caesar.

Sten Stensgard is the new guy in the ofﬁce, but he won’t let that deﬁne him. Determined to move up in the world, Sten will do anything to get ahead— blackmail, lie, cheat, and even fall in love. Amidst a controversial ofﬁce election, ideologies clash in a new version of Ibsen’s dark comedy about the intersection of personality and politics.

British-Canadian playwright Ashley Pearson holds an MFA in theatre directing from East 15 Acting School, and a BA&Sc in liberal arts from Quest University Canada. She was an apprentice director at New York Stage and Film’s Powerhouse Theater Festival, and has studied theatre at GITIS (Russian University of Theatre Arts) and Seacoast Theatre Centre. Her work as a writer includes North [Long-listed for the Theatre503 New Play Prize], Nerves of the Heart [awarded Distinction by QUC], West, and a new translation of Ionesco’s The Chairs. Pearson is an Associate Artist with Riot Act.

The League of Youth is directed by Riot Act Artistic Director Whit Hertford. Hertford is an Associate Director at Theatre N16 and received his MFA in theatre directing from East 15 Acting School – recent credits include his Chekhov adaptation The Misbegotten Hope of the Dirty Bird. The veteran American actor turned London-based Hertford (Jurassic Park, Glee, Raising Hope) recently portrayed cult leader Charlie Manson in the ﬁlm, Prettyface. Additionally he wrote and starred in the ﬁlm Wildife, which was an ofﬁcial selection of the 2015 Cannes Film Festival Court Métrage.

Riot Act is a radical band of artists who seek innovation that bleeds and unapologetically aims to incite new writing and breathe oxygen into classic themes and texts. Their acts of excavation, incision and resuscitation have positioned them to be one of London’s exciting new theatre laboratories.

Sonia Friedman Productions has announced that Ruth Wilson will star in Ivo van Hove’s adaptation of Jean Cocteau’s The Human Voice, which he also … END_OF_DOCUMENT_TOKEN_TO_BE_REPLACED

The award-winning smash-hit production of Girl From The North Country, written and directed by celebrated playwright Conor McPherson (The Weir, The … END_OF_DOCUMENT_TOKEN_TO_BE_REPLACED

John Barrowman is back on tour with his new show ‘I am What I am’ The tour launches on Saturday 30 April, 2022 at Southend‘s Cliff’s Pavilion and … END_OF_DOCUMENT_TOKEN_TO_BE_REPLACED

Producer Karl Sydow has announced the West End return of a dazzlingly renewed version of Dirty Dancing - The Classic Story On Stage, following a … END_OF_DOCUMENT_TOKEN_TO_BE_REPLACED