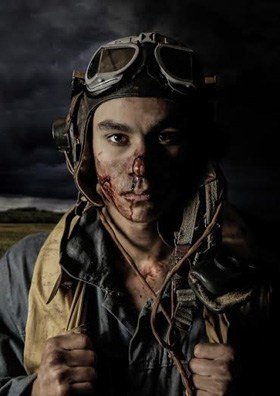 GreanTea Productions are performing a second run of their critically acclaimed sell-out production of ‘Immortal’ this Easter in London. Written by Ciaran McConville, the gripping play is about a World War II bomber crew.

The play captures the terrifying and surreal experience of a downed Lancaster crew trapped behind enemy lines, fighting for the life of their wounded engineer. But when an unwanted visitor comes knocking, they must make the ultimate choice between camaraderie and survival.

Nicole Burley, director of the play, says: “It’s a beautifully written and deeply moving piece, with surprisingly uplifting moments of comedy and a huge amount of drama. Immortal is a dream for any director and is intensely rewarding to produce.”

Co-founded in 2013, GreanTea Productions has produced two of McConville’s plays, both runs playing to sell-out audiences. Their previous production of Immortal in 2015 was praised as a “fantastic” production by Essential Surrey’s reviewer Matt James, who described GreanTea as “a very promising new company” who “[took] the audience on a compelling journey.”

Official sponsor Bruno Wang, founder of the Pure Land Foundation and Bruno Wang Productions, says “I am delighted to be supporting this production of Immortal by the brilliant GreanTea Productions. Immortal is a gripping and moving tale and this will be a compelling evening for those lucky enough to see it.”

Playwright McConville, who previously mentored director Nicole Burley at the Rose Theatre, Kingston, says: “Grean Tea’s work ethic and focus on the ensemble is perfect for this piece. They exude talent and consistently high production values. I couldn’t be happier about the play going to the wonderful Watermans; an important independent arts centre with a real focus on new talent and engaging their local community.”

Past productions of Immortal have received critical acclaim. TimeOut markedly described it as “comical as it is haunting, a perfect balance of humour and urgency throughout.” Utterly “gripping and compelling”, Immortal has stunned both audiences and critics alike.

www.greanteaproductions.com for the latest news and information.