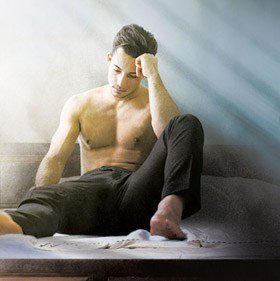 Cat On A Hot Tin Roof by Tennesee Williams is at Theatre Clwyd in Wales with previews from 4th February, and Opening Night on 10th February, and runs until Saturday 5th March 2016.

In a plantation owner’s mansion on an airless Mississippi night, faded golden boy Brick and his beautiful but frustrated wife Maggie have gathered with the rest of the family to celebrate Big Daddy’s 65th birthday. As the grandchildren sing and the alcohol flows, deep currents of desire and deceit pull the evening inexorably towards disaster.

Tennessee Williams’ Pulitzer Prize-winning drama is one of the greatest American plays, a classic of Twentieth Century drama staged now for the first time at Theatr Clwyd. Andrew Langtree, who plays the part of Gooper recently took time out to reflect on his time in Ghost The Musical, and talks about Cat On A Hot Tin Roof.

Neil: Our previous interview with you was when you were playing the role of Carl Bruner in Ghost The Musical at the Piccadilly Theatre in London’s West End. Do you have any particular favourite memories of being a part of Ghost?

Andrew: It was great to work with very interesting people like Matthew Warchus and Bruce Joel Rubin, who was so very generous with his work, doing what had to be done to bring the story to the stage on such a huge project like Ghost. That whole company and creative team, with Chris Nightingale supervising the music – it was a close-knit and creatively powerful group of people. You can’t ask for more than that really. The Piccadilly Theatre was brilliant and getting to work with Sharon D Clarke, who gives the best hugs in the West End – so it doesn’t get better than that! I did go on a short tour of Asia with the production which was fascinating and it was great to see how the show went down with audiences there as well.

Andrew: It’s one of Tennessee Williams’ popular masterpieces. On the surface, it sort of catches a lot of the cast on the back-foot as to how irredeemable some of these characters seem to be. They strongly push for what they want out of the situation they find themselves in.
They live on the richest plantation in the Mississippi Delta. Big Daddy, played by Desmond Barrit, owns the plantation and unbeknown to him is about to pass away and the family are beginning to squabble over the ‘spoils’. Gooper is the eldest child. Brick, his younger brother being one of the main characters, has turned to drink after his sport’s career has gone downhill.
Gooper and his wife Mae have started to visit as regularly as they possibly can in order to ingratiate themselves with the parents Big Daddy and Big Mama, to try and secure the farm in his will if he decides to make one. So they are really out for what they can get. They are not particularly redeemable characters from the outside. The trick is to find out what you love about a character and find their motivation.

Neil: What attracted you to be a part of this production?

Andrew: A few things really. I have worked on a couple of Tennessee Williams’ plays in the past. I love his material as it is so detailed and fun to work on. He really goes out of his way to write about real people in real situations. You get to learn a lot of history and the language used is very satisfying to work with. It is one of the greats. Also, the high quality work that goes on here. I worked here before, with fond memories of Oh, What a Lovely War, and what a lovely show that was which we took to Cardiff. So it was a really attractive part to take on. I have a new director to work with, Bob Hastie. It was really great to be called in by Rob and lovely that he actually remembered when he first saw me. He said; “the last time I saw you, you were at the national student drama festival”. That was in 1998. What a memory. He is a very interesting character to work with.

Neil: What can you tell us about rehearsals?

Andrew: We were rehearsing in Regents’ Park London for the first three weeks and we are now in Mold, where the theatre is, doing our final week before the show begins performances.
My character Gooper and his wife Mae have five children who are referred to in the play as “no-necked monsters”. During rehearsals, we have been training the ‘no-necked monsters’ to get up to all kinds of mischief. They have done very well. We are just getting to the stage where we run through sections of the play together. There are so many twists and turns and everybody has such a complicated journey and that’s brilliant.

Neil: For any up and coming actors/actresses what can you tell us about the process of how you learn your lines for a new production?

Andrew: I find with particularly complex texts such as Williams would write, I ask the kind of questions which we were always drilled with at drama school. I write down what the character says about themselves, what the character says about others and what other characters would say about them. I go through all the facts about the character with a fine tooth comb. When I did Of Mice and Men, with David Thacker, David would absolutely drill you about the facts – it was like doing a refresher course in your art. It is about mining all of the facts out of the script. Who you are, where you are and what your purpose in that situation is. Once you have got those facts then the lines start to work for you. You are aware of your situation and you aren’t chasing the lines. It isn’t a memory exercise.

Neil: Do you have any set routines when performing in a production?

Andrew: Yes I do. Generally for a play I like to arrive about half an hour to an hour before the half-hour call. I go through my own vocal warm-up. I also do physical warm-ups and stretches to get myself ready. It isn’t just about the physical aspect but also the mental side. I also tend to get into my costume quite early just in case there are any mishaps. Finally, I check my flies, because I am pretty good at forgetting things like that. I then check the costume and just take a moment to relax and be ready.

Neil: Why should everyone come along to see Cat On A Hot Tin Roof?

Andrew: It’s an American Classic. We have a terrific cast on board with Desmond Barrit, Catrin Stewart, Abigail McKern, Gareth David Lloyd etc, it is a very experienced and well-drilled cast. It’s a play where you can really enjoy sinking into its world, which is set in 1955. It’s a forgotten world where you can escape into.

Andrew: It’s difficult to say at the moment. There are a couple of projects that I have been working on for a number of years now. I have been doing workshops for Groundhog Day The Musical for some time. There is a possibility of doing that when it starts at The Old Vic – but that isn’t to say that I have been cast in it. Apart from that there are a number of irons in fires.