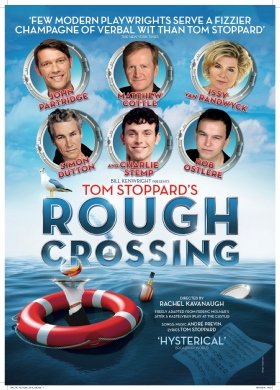 Bill Kenwright presents the long-awaited return of Rough Crossing written by Academy, Tony and Olivier award-winning writer Tom Stoppard (Shakespeare in Love, Rosencrantz and Guildenstern Are Dead, The Real Thing, Arcadia) and directed by acclaimed director Rachel Kavanaugh (The Wind in the Willows, Half a Sixpence).

The star cast is led by John Partridge, winner of this year’s Celebrity Masterchef. John is best known to TV audiences as the suave and charismatic Christian Clarke in EastEnders. He is one of musical theatre’s most prolific leading men, having played in major West End musical hits such as Chorus Line, Chicago, and in Bill Kenwright’s recent La Cage Aux Folles.

Joining John fresh from Snow White at the London Palladium is one of musical theatre’s brightest upcoming stars, Olivier-award nominee Charlie Stemp, who has triumphed on Broadway starring opposite Bette Midler in Hello, Dolly! and in London in Half a Sixpence. He will play Bert in the 2019 revival of Mary Poppins. They will be joined by West-End star Issy van Randwyck (Fascinating Aïda), comedy TV favourite Matthew Cottle (Game On, The Windsors), Holby City’s Rob Ostlere and Simon Dutton who portrayed Simon Templar in The Saint.

Two famous but desperate playwrights are stuck in an ocean liner headed for New York, feverishly trying to rehearse their latest show before reaching land, and opening night. But they are constantly distracted by their delicate composer’s attempts to end it all, having overheard his lover confess her feelings to the leading man.

Add an absurdly unorthodox waiter, a mistimed lifeboat drill and a vanishing glass of brandy and soon the sharp Atlantic winds turn to world-class gales of laughter as these colourful characters become tangled up in a typically Stoppardian string of absurd events.

'Look anyone will tell you, I’m a pretty straight sort of guy.' Tony Blair A reckless reappraisal of the life of former Ugly Rumours front man and … END_OF_DOCUMENT_TOKEN_TO_BE_REPLACED

Michael Harrison and the Really Useful Group are thrilled to announce that The Wizard of Oz, the musical based on the iconic story by L. Frank Baum, … END_OF_DOCUMENT_TOKEN_TO_BE_REPLACED

Following major demand for tickets, the Queen of comedy Dawn French has announced a host of new UK tour dates for her critically acclaimed live … END_OF_DOCUMENT_TOKEN_TO_BE_REPLACED